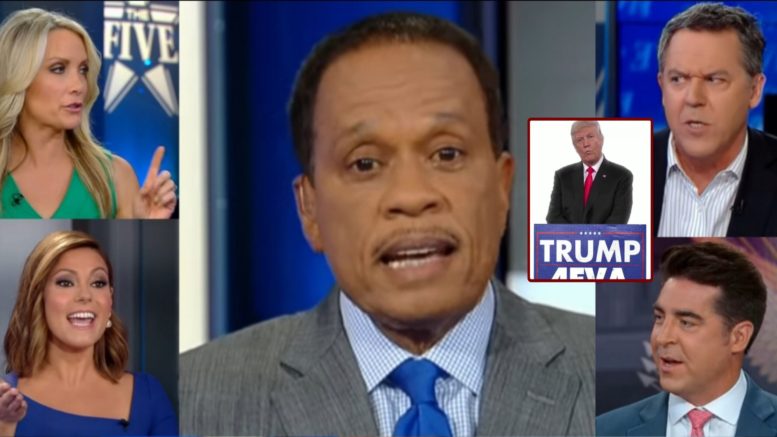 President Trump took to Twitter on Friday where he seemingly trolled his haters and gave the media and left something to cry about over the weekend.

Trump joking around, knocked his haters against their “dictator” claims when he tweeted a video showing campaign signs of Trump winning over and over.

Like clockwork, the President’s video did, in fact, trigger the left and the hosts of “The Five” reacted on Monday where they poked fun at critics and co-host Juan Williams.

Before showing the President’s clip, Greg Gutfeld said, “Here’s a theory: in most contests the team having more fun wins. And the team that loses its sense of humor, loses, period. Take Friday, when President Trump posted a meme predicting he’ll be President forever and ever.”

“Normal people, i.e. not in the media, not under the spell of irrational obsessions, saw this as light-hearted trolling, mocking the triggered Trump-critics like this fellow here,” Gutfeld said as he proceeded to play a clip of Bill Maher. “If he loses, Trump, he won’t go. I’ve been saying that since before he got elected,” Maher claimed.

“It’s so obvious it hurts. But still, the media reports Trump’s jokes as dire warnings,” Gutfeld explained. (Continued Below)

“I’m anxiously awaiting for [the media’s] exposé on why the chicken really crossed the road, or does time fly if you throw a clock through the air? I bet that gets three Pinocchios. How do these people get so… to use the medical term: stupid?” Gutfeld asked.

“The media once operating under the guise of journalism, are now just hall monitors and pundit thinks. Their jobs reduced to screaming, ‘Look what someone said on TV! It’s a joke, but not to us.’ They barely get out of bed anymore, their workplace attire: sweatpants and an open bathrobe. But that’s today media, reporting on you, as you make them the but of the joke,” he added mocking the left wing media.

Jessee Waters responded to the President’s tweet and suggested that Trump likes watching the Democrats chase their own tails. “It’s so stupid. They’re humorless. It’s Hillary and the left who haven’t accepted last results of the election. Remember they called him an ‘illegitimate Russian hacker’ for two years,” he said. (Continued Below)

Juan jumped in and claimed that President Trump talks about Article 2 all the time and proceeded to make his case as to why President Trump can’t serve more than two terms. “Article 2 establishes the executive branch and says it’s two terms,” he said.

“On the one hand, I’ve said this to you before, remember? At the end of the 2016 race, when people asked [Trump] what happens if he loses? He said ‘Well, maybe, maybe not I’ll accept their results.’ I don’t know if he was joking there… but that’s what he said. To me, the question is: why are we having this segment? Why are we discussing this?” Juan asked.

The panel busted out laughing at Juan and Lisa Boothe fired back, “You just proved Greg’s point: the left cannot have fun, and you take this so seriously– this is so funny!”

Juan became triggered and asked, “But it makes you wonder, does he have ‘authoritarian instincts?'”

The whole panel laughed again and declared, “Oh come on, Juan!” (Video Below)

Booth added, “You cannot watch [Trump’s twitter video] and not crack up.”

“The President is a powerful man. We should not be sitting here to debate. Is he joking, is he serious? We don’t know,” Juan said as his co-hosts laughed at him.