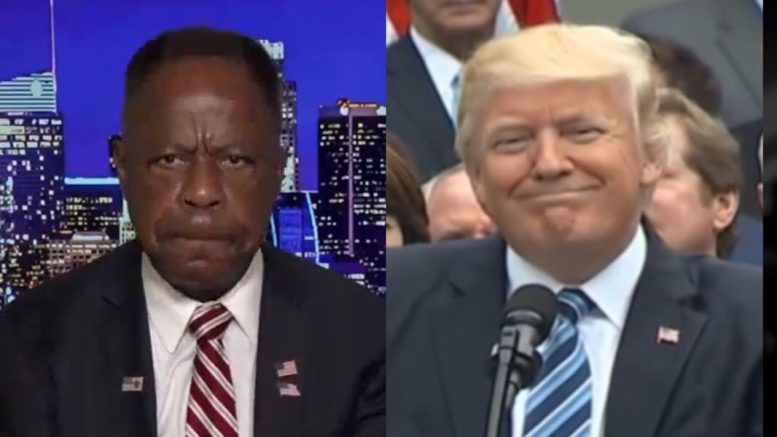 Civil rights attorney and Fox News contributor Leo Terrell reacted to the news of 45th President Donald Trump’s Mar-a-Lago home in Palm Beach, Florida being raided by FBI agents, suggesting Democrats are “afraid” of the former president and want to “block” him from running for reelection in 2024.

Trump issued a statement on Monday from Truth Social reporting that his Mar-A-Lago home is “under siege” by a “large group” of FBI agents, describing it as “dark times for our nation”, as previously reported by The Freedom Times.

“This obsession to prevent President Trump from running for reelection is overwhelming by the Democrats. They are afraid of this man. They are trying to tell the American public, ‘Hey, we’re going to tell you who you can vote for’. They do not want Trump to run for office,” Leo Terrell said Tuesday during an airing on Fox News.

“Here’s the most important point: as a lawyer, I can’t wait to see, not just that warrant, I want to read the officer who supplied the declaration to submit that warrant to the judge, because I want to see what are the facts,” he said.

“The political left has one obsession: not to allow President Trump to run for office, to deny the American public the right to choose the 47th president. And I think that’s wrong,” Terrell expressed.

Asked what he thinks will happen next, Terrell recommend that officials, “show us the evidence”, asking, “What is the motivation why they had to raid the president’s house in lieu of a subpoena?”

“What is the end game? The progressive left wants to block Trump from running for office. That’s not going to happen. He’s going to run. I’m sorry Democrats. You’re celebrating too early,” he suspects.

Mr. Terrell also believes the raid “is going to damage the political system”, adding, “It has basically created a Banana Republic mentality”.

“The party of power wants to prevent the opposition — those people want President Trump from running for office. I guarantee you, he is going to run. That’s the bottom line,” he said.

LEO TERRELL reacts after FBI raids President Trump’s Mar-a-Lago home: “They are afraid of this man. The Democrats and the political left has one obsession: not to allow President Trump to run for Office, to deny the American public the right to choose the 47th president.” pic.twitter.com/CN4n9mGhQK

Terrell also requested to “see the search warrant and the agent’s affidavit supporting the warrant” and offered his legal service to President Trump.

I want to see the search warrant AND THE AGENT’S AFFIDAVIT supporting the warrant. Thank goodness I am a civil rights lawyer! #VoteTrump2024

I am calling for a “Franks hearing” regarding the veracity and credibility of the warrant!

President Trump: I have 30 years of legal experience at your disposal.

Attention Mitch McConnell: Trump’s Supporters would like to know your position on the raid! Please respond to my tweet before the end of the business day!

Related: Leo Terrell: People Will Continue To Support Donald J. Trump Because Of What He Has Done For This Country The Last 4 Years