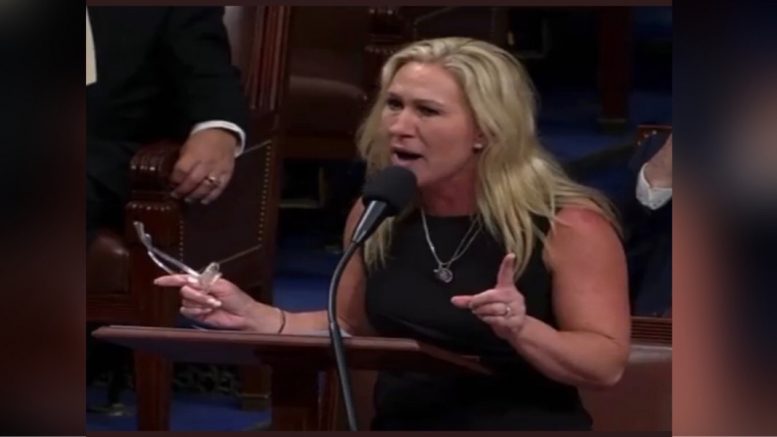 Rep. Marjorie Taylor Greene (R-GA) spoke on the House floor Thursday ahead of California Democratic House Speaker Nancy Pelosi’s [bi]partisan Select Committee public hearing, which is allegedly “investigating” the protest that occurred on January 6, 2021 at the Capitol in Washington, D.C.

The committee will purportedly detail the findings from its yearlong investigation of the protest at the Capitol on January 6th in a series of public, televised hearings starting Thursday at 8 p.m. ET. The committee is made up of seven Democrats and two “Never-Trump” Republicans; Reps. Liz Cheney (WY) and Adam Kinzinger (IL).

Rep. Greene, in her remarks, speculated what the select committee won’t be telling viewers during the hearing[s] into their investigation and called their “cinematic production” untruthful”, insisting that it is “going to be a political narrative, and it is all for politics”.

“You know there was reporting that came out today on the failure of this chamber, this Capitol to be secured. … What amazes me is the overwhelming amount of evidence that the National Guard was requested to be here, and it was continuously turned down. And this biggest shocker to me is there’s three people that turned it down. It was Chuck Schumer in the Senate. Nancy Pelosi in the House, and Mayor Muriel Bowser,” the Georgia lawmaker said.

“I want you to know when we take back majority these will be the investigations we take on,” Rep. Greene said.

“We still do not know who the pipe bomber is. Who is the person? There are videos everywhere. It’s all over the FBI website, but we don’t hear that coming out consistently from the January 6 committee,” Greene pointed out.

“You know what else we don’t hear enough about? We do no understand what is happening to the over 800 people who have been arrested and charged for the events on January 6. We don’t know what is happening to them and there are dozens of them right here in this city wasting away in the D.C. jail, being treated like political prisoners of war. And you know what? This is before they have been convicted of anything. They are there pretrial. And no one cares about them; no one on this January 6th committee,” she explained.

“What about the fact that there’s a man named Ray Epps? Do you know who’s not in the D.C. jail? Ray Epps. … I know, because I went in the D.C. jail. I did not see him there. He also is on video, over and over again, telling people to go in the Capitol. … I don’t think we’re going to hear about Ray Epps,” Greene said.

There’s surveillance cameras all over this building. If we really want to know the truth about January 6, it’s real easy. All we have to do is release the video footage and everyone can see for themselves what exactly happened. I think the American people deserve that while they have to watch and go through this big cinematic production tonight and carrying on for weeks and weeks and weeks. … The American people deserve to see all of the video surveillance, not just the little cut and pasted pieces that the January 6 Committee is going to show tonight. … We should be truthful. But what is about to happen tonight is not going to be truthful. It’s going to be a political narrative, and it is all for politics, and it is sickening.

The American people deserve to know exactly what happened on January 6th, 2021.

That won’t happen with the cut and paste Hollywood production we’re going to see tonight.

Release all the tapes, let the American people know the truth! pic.twitter.com/1sM0w39jqw

GOP Sen. Sasse Reportedly to Announce his Intent to ‘Resign’; University of Florida Selects Sasse to be its Next President