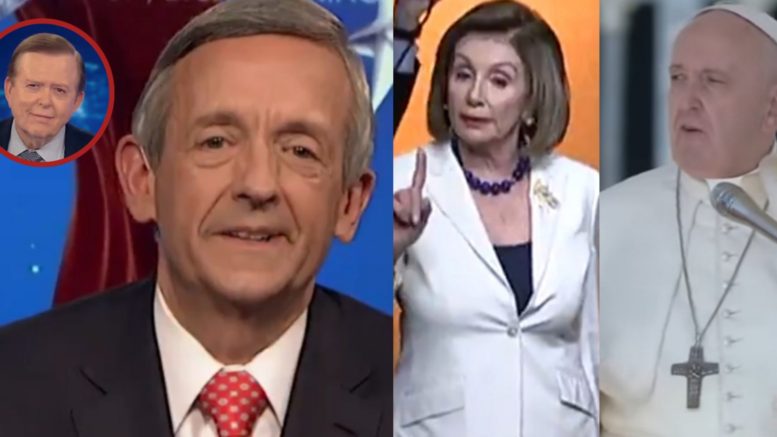 While Pelosi was ending her press conference about impeachment, a reporter wanted to know if she “hates the president”, which Pelosi replied, “We don’t hate anybody, not anybody in the world.”

In his response to Pelosi, Pastor Jeffress said, “You know, I find it interesting that she is so indignant about being accused of hatred, saying that it’s against her Catholic faith. Well, what about her belief and unrestricted abortion? That certainly goes against her faith. And she doesn’t apologize for that. She celebrates her belief and the murder of the unborn.”

While in Thailand, Pope Francis spoke about the treatment of refugees around the world and said “there are walls that even separate children from parents,” likely referring to President Trump’s policies on the southern border. “Herod comes to mind. Yet for drugs, there’s no wall to keep them out.”

In response to Pope Francis’s comparison, Jeffress said, “King Herod is the one who…murdered thousands of children, trying to get rid of Jesus. President Trump is the one who has protected the lives of childen in the womb — the most pro-life President in history.”

“Herod wanted to to extinguish Christmas by getting rid of Christ before the first Christmas,” he added. “President Trump celebrates Christmas, has brought it back to the forefront of our country and that means bringing Christ back as well. Video Below

Energized not Paralyzed. @robertjeffress says @realDonaldTrump is unbothered by the Dems’ impeachment push as the Party of Hate continues to lose support from voters. #AmericaFirst #MAGA #Dobbs pic.twitter.com/3u2yLj0NmH

Charlie Daniels To The Ayatollah: “In Case Nobody Has Told You Obama Is No Longer In Office”

WATCH: Trump Busts Out A Couple Of Dance Moves As Fireworks Go Off Over Him At Georgia Rally