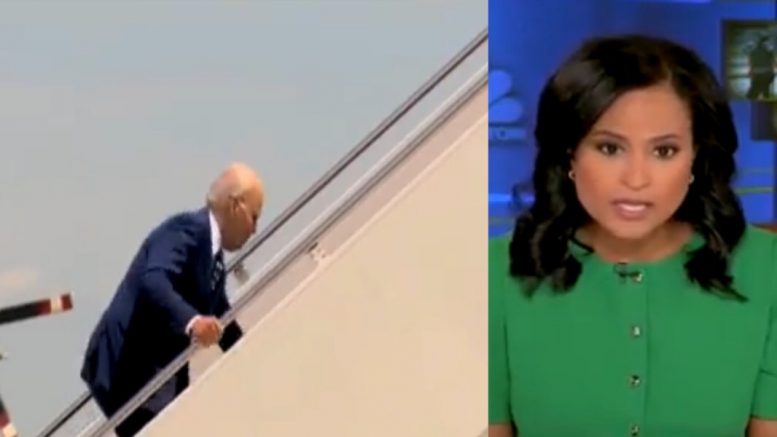 79-year-old Joe Biden appeared to nearly fall down — before catching himself on the hand railing — while walking up the stairs of Air Force One on Wednesday.

This is not the first time Biden has had issues up the stairs. Two months after taking office last year, Biden fell three times as he climbed up the steps of Air Force One.

An MSNBC host said Wednesday while Biden was boarding the plane, “It appears the president did have a slight trip there as he’s boarding Air Force One”.

AGAIN: Joe Biden nearly collapses on the stairs of Air Force One, trips and nearly falls on his face.

Even MSNBC host gasps: “The President had a trip there…” pic.twitter.com/h117I0JCbv

Last March, Biden fell three times while walking up the stairs to board Air Force One:

Joe Biden just fell 3 times in a row trying to go up the stairs to Air Force One pic.twitter.com/gTUTckUH32

Following Biden’s falls last year, 45th President Trump remarked over the situation, saying, “[I] watched as Joe Biden went up the stairs today of Air Force One. And I said, ‘I didn’t lose to him,’ which we didn’t — almost 75 million votes and probably much more than that.”

Related: Crowd Erupts Into Laughter As Trump Comments On Biden’s Air Force One Stumble: “I Didn’t Lose To Him”