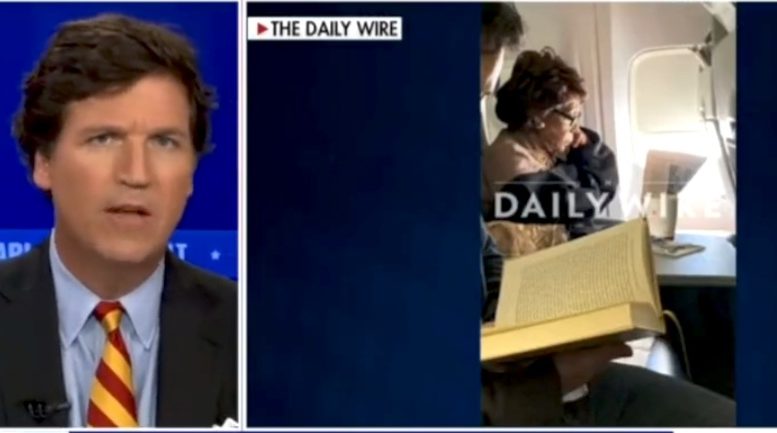 Tucker Carlson exposed more hypocrisy in regards to political elitists after Democrat Rep. Maxine Watters was spotted on an airplane not wearing a mask for over an hour.

The Fox News host summarized a report by the Daily Wire, which obtained a photo of a maskless Watters that was taken by an individual who was seated in close proximity to the Democrat congresswoman on a recent United Airlines flight from Dallas, TX to Los Angeles, CA.

On his Tuesday night program, Tucker stated as follows:

According to the Daily Wire, which got the picture, flight attendants only asked Watters to put on her mask after they were alerted by a tipster. So she could go bare-faced for a full hour and even took a maskless nap.

Boy, if there’s a definition of luxury on commercial air travel — a maskless nap. Could you imagine being allowed to breath while you nap on a plane?

You notice that Maxine Watters was not physically dragged off a plane, charged with a felony, permanently banned from flying. No, of course not! It’s Maxine Watters. She can do whatever she wants. Shut up, sir! You’re not Maxine Watters. Video Below

.@RepMaxineWaters spotted on an airplane with no mask. Unlike the rest of us peasant she wasn’t dragged off the plane. pic.twitter.com/7wzyjzifan