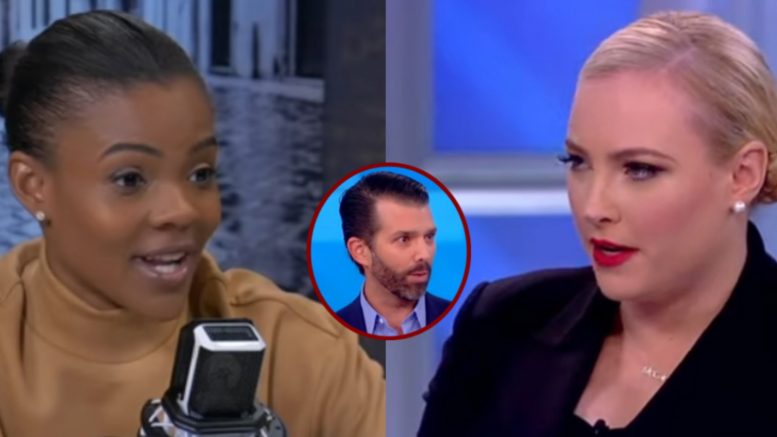 During Thursday’s airing of The View, Meghan McCain grilled Donald Trump Jr. over President Trump’s “character” and the handling of his feud with the Khan family.

“Mr. Trump, a lot of Americans in politics miss character. And a lot of people miss the soul of this country,” McCain said to Trump Jr. “You and your family have hurt a lot of people, and put a lot of people through a lot of pain, including the Khan family, who was a gold star family that I think should be respected for the loss of their son. Does all this make you feel good?”

Don Jr. replied: “I don’t think any of that makes me feel good, but I do think that we got into this because we wanted to do what’s right for America. My father has been working tirelessly to bring back the American dream who have watched politicians with no business experience send that American dream abroad to countries that hate our guts. He has brought jobs back. He has created unprecedented levels of unemployment numbers for African-Americans.”

McCain then questioned Don Jr. on whether he feels that it is “worth it” for President Trump to attack Gold Star families, and suggested President Trump should apologize to the Khans.

“He calls a lot of those Gold Star families, and he has a lot of care for those people,” Don Jr. replied. “He was under constant attack by the same people. When he’s under attack by the establishment, but the reality is, he’s a counterpuncher. And as a conservative, I would hope you would appreciate that conservatives haven’t been known for fighting back for a very long time. We have ceded ground to the liberals and the liberal elite for decades by not actually fighting back. I understand we can keep going back to character. I think he has great character.”

McCain pressed on by using a situation regarding her deceased father John McCain as an example, which led to a tearful exchange between her and Kimberly Guilfoyle. Video Below

Before Guilfoyle could reply, Don Jr. said: “I think it depends on the hat that I’m wearing. For me, as a citizen and a father of kids in New York City, you know, it hasn’t exactly been peaches and cream for us either. It is worth it when I go around the country, and I see people affected by these policies getting to live their American dream again. When I see, it’s happening with those people, and they tell me their stories how they’re so happy they voted for my father. They’re so happy he had the guts to take on those people, to not just accept the status quo.” Video Below

In her response, Guilfoyle told McCain that she knew her father well and she considered him a friend. “I miss him. I understand your loss. Yesterday was the anniversary of my mother passing. I lost my father Thanksgiving night,” Guilfoyle said. “It breaks my heart to hear anyone say anything about your father. I understand that and I know how difficult it is.”

“And I know how difficult it is for him,” Kimberly said as she grabbed Don Jr.’s shoulder. “Everyone is attacking him and his family. They’re out in front of his apartment. They want him in jail.”

After seeing the exchanges between Trump Jr., McCain and Guilfoyle, Candace Owens dropped in her two cents in a post on Twitter. Video Below

“I am SO SICK of @MeghanMcCain turning EVERY political interview into a tearful monologue about her father,” Candace said in a tweet. “It is a CHEAP, emotional maneuver that she uses so that nobody can question her non-existent authority.”

I am SO SICK of @MeghanMcCain turning EVERY political interview into a tearful monologue about her father.

It is a CHEAP, emotional maneuver that she uses so that nobody can question her non-existent authority.

There’s no sugar-coating when Candace Owens telling you what she really thinks!

Joy Behar Questions ‘Why Does Trump Need All Those Doctors?’, Instantly Gets Blasted