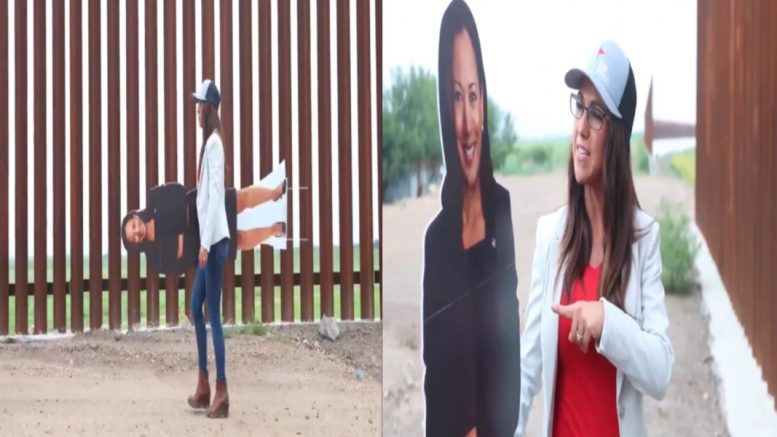 Congresswoman Lauren Boebert (R-CO) posted a video on Twitter Tuesday after a trip to McAllen, Texas and reported what she learned on her visit to the U.S./ Mexico border.

Rep. Boebert also took a cardboard cutout of Kamala Harris to the southern border and placed it into the ground, facing The Wall. She told the cardboard replica of Harris, “I want you to stand here, and look at what you’ve done”.

“I’m Lauren Bobert, and I traveled down to McAllen, Texas, the Rio Grande Valley sector to see what’s up at our southern border,” the Colorado congresswoman said.

“You know what is not up at the southern border?” Rep. Bobert asked. “Respect for law and order, funding for our border patrol. And where’s the media to cover this crisis?”

“More than 70 days ago, Biden named cackling Kamala as border czar, but she hasn’t done a single thing to protect the American people. She hasn’t even been down here to see the border or the tens of thousands of children, wrapped in aluminum foil,” she said. Continued Below

Rep. Bobert insisted: “You can’t just hear about what’s happening, you have to come down here to see for yourself, to really understand the devastating reality at our southern border”.

“I brought Kamala down to see exactly what this regime is responsible for with their man-made crisis,” she announced, while carrying a cardboard cutout replicating the Democrat vice president.

“Now Kamala, I want you to stand here, and look at what you’ve done,” the Colorado representative instructed, looking at the cardboard cutout after placing it into the ground, facing The Wall. Video Below

I went to the southern border to see what’s up, but I didn’t go alone… pic.twitter.com/m66fet7mUT