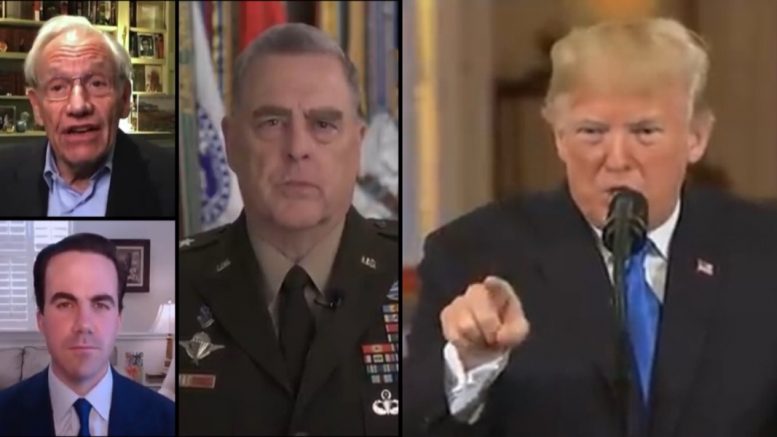 45th President Donald J. Trump issued a Tuesday statement via email from his “Save America” PAC over reports that Chairman of the Joint Chiefs of Staff Gen. Mark Milley allegedly made two phone calls to Chinese officials in fear that Trump would create conflict with the communist nation, according to a book authored by Washington Post associate editor Bob Woodward and national political reporter Robert Costa.

“General Li, I want to assure you that the American government is stable and everything is going to be OK,” Milley told him during the first call, the book said. “We are not going to attack or conduct any kinetic operations against you.”

The book, excerpted in the Washington Post, also stated that Milley told Zuocheng that he would warn him in advance should America decide to “attack.”

“Gen. Li, you and I have known each other for now five years. If we’re going to attack, I’m going to call you ahead of time,” Milley added, as reported by the book, “Peril,” which is set to be released next week. “It’s not going to be a surprise.” Continued Below

The authors of the book also claim Milley contacted Zuocheng a second time to reassure him that the U.S. would not make any type of advances or attack China in any form, as Milley promised, “We are 100% steady. Everything’s fine. But democracy can be sloppy sometimes.”

In an email statement on Tuesday, the 45th Commander in Chief responded:

If the story of “Dumbass” General Mark Milley, the same failed leader who engineered the worst withdrawal from a country, Afghanistan, in U.S. history, leaving behind many dead and wounded soldiers, many American citizens, and $85 Billion worth of the newest and most sophisticated Military equipment in the world, and our Country’s reputation, is true, then I assume he would be tried for TREASON in that he would have been dealing with his Chinese counterpart behind the President’s back and telling China that he would be giving them notification “of an attack.” Can’t do that! Continued Below

The good news is that the story is Fake News concocted by a weak and ineffective General together with two authors who I refused to give an interview to because they write fiction, not fact.

Actions should be taken immediately against Milley, and better generals in our Military, of which we have many, should get involved so that another Afghanistan disaster never happens again. Remember, I was the one who took out 100% of the ISIS Caliphate. Milley said it couldn’t be done!

For the record, I never even thought of attacking China—and China knows that. The people that fabricated the story are sick and demented, and the people who print it are just as bad.

In fact, I’m the only President in decades who didn’t get the U.S. into a war—a well known fact that is seldom reported. Continued Below 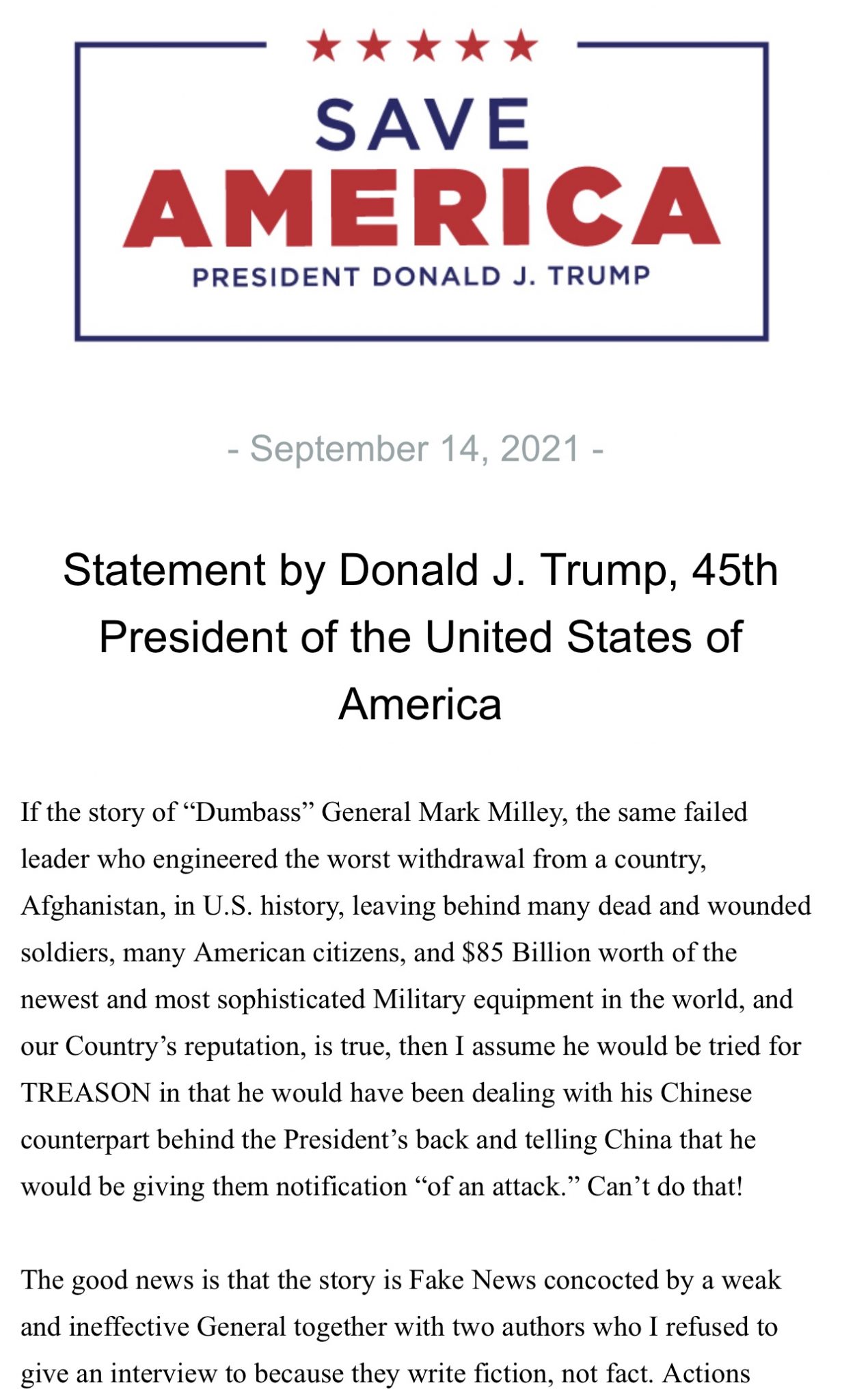 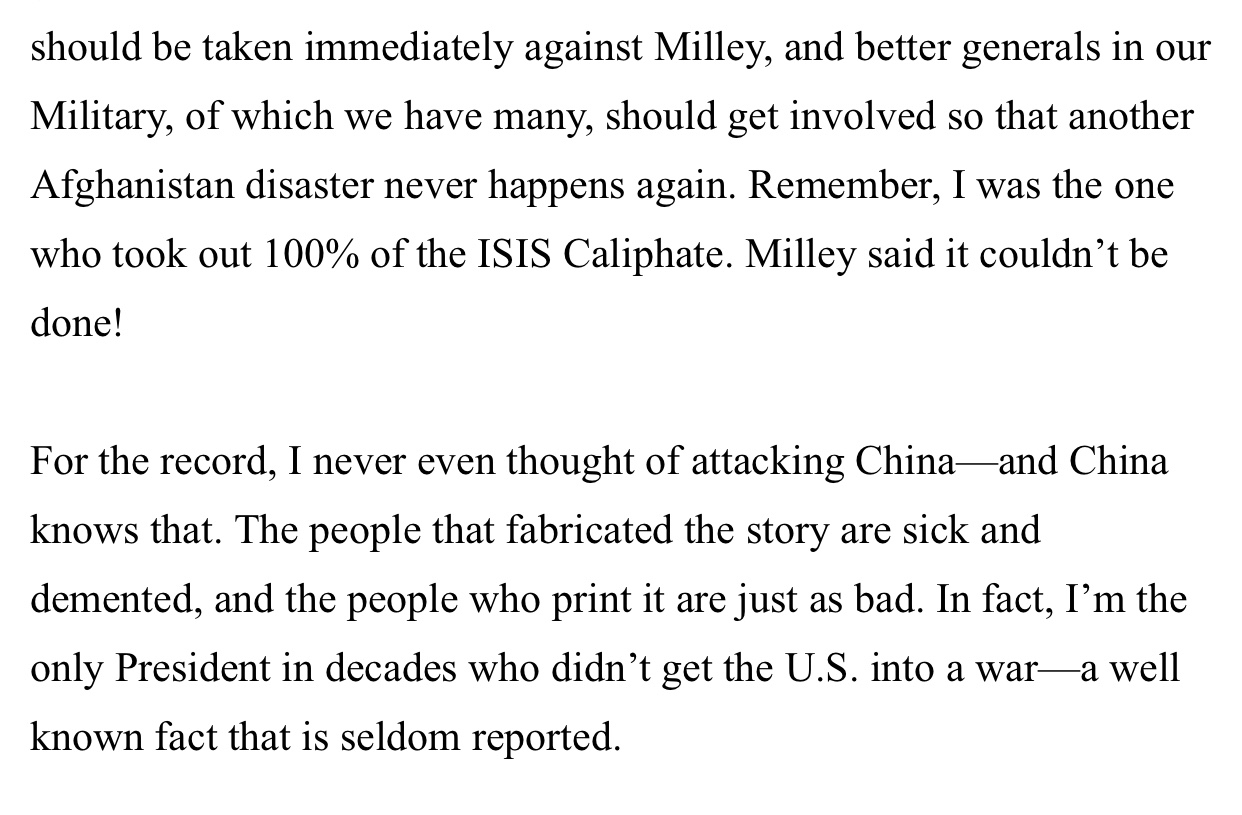