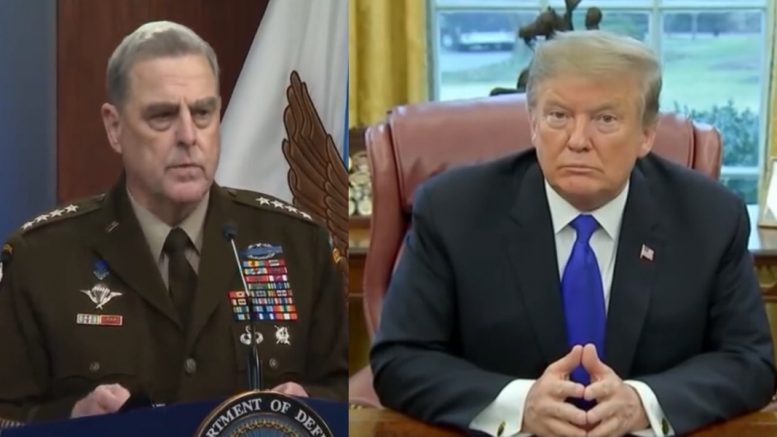 During the final months of 45th President Donald Trump’s term, Chairman of the Joint Chiefs of Staff Gen. Mark Milley reportedly made two phone calls to Chinese officials in fear that Trump would create conflict with the communist nation, according to a book authored by Washington Post associate editor Bob Woodward and national political reporter Robert Costa.

It is alleged that Milley made two secret phone calls, both to his Chinese counterpart, Gen. Li Zuocheng of the People’s Liberation Army. The book alleges that the phone calls took place prior to the 2020 presidential election on Oct. 30, 2020, and two days after the Jan. 6 Capitol [protest], on Jan. 8, 2021. According to the book, Milley contacted Zuocheng after he had reviewed intelligence that suggested Chinese officials believed the United States was planning an attack on China amid military exercises in the South China Sea, Fox News reported.

“General Li, I want to assure you that the American government is stable and everything is going to be OK,” Milley told him during the first call, the book said. “We are not going to attack or conduct any kinetic operations against you.”

The book, excerpted in the Washington Post, also stated that Milley told Zuocheng that he would warn him in advance should America decide to “attack.”

“Gen. Li, you and I have known each other for now five years. If we’re going to attack, I’m going to call you ahead of time,” Milley added, as reported by the book, “Peril,” which is set to be released next week. “It’s not going to be a surprise.” Continued Below

The authors of the book also claim Milley contacted Zuocheng a second time to reassure him that the U.S. would not make any type of advances or attack China in any form, as Milley promised, “We are 100% steady. Everything’s fine. But democracy can be sloppy sometimes.”

45th President Donald Trump responded to the report during a Tuesday interview on Newsmax, suggesting that the report is fake news and calling Bob Woodward a “sleeze”, but said if the report is true, it is “treason”.

“If it’s actually true, which is hard to believe, that he would have called China and done these things and was willing to advise them them of an attack, or in advance of an attack, that’s treason,” Trump said. Continued Below

“It’s totally ridiculous. I never thought of it. … You heard a lot of anger on China about trade, and we made a great trade deal. You heard a lot anger on China with the China virus, but for him to say that I would even think about attacking China, I think he’s just trying to get out of his incompetent withdrawal with Afghanistan,” the former president said.

“The worst, the dumbest thing that anybody’s seen — probably the most embarrassing thing that’s happened to our country, where they killed our soldiers. We left with embarrassment on our face. We left with Americans behind, and we left 85 billion dollars worth of the best equipment in the world that I bought, because I was the one that rebuilt our military. And then, Biden gave it away,” Trump explained.

“For him to say I was going to attack China is the most ridiculous thing I’ve ever heard, and everyone knows it. I have to tell you, I don’t know if they have him on tape saying this, but I found Woodward and I found his cohorts to be extremely dishonorable people. That’s why I didn’t do an interview with him,” the 45th President said. Continued Below

“I think he’s highly overrated. This guys’ one of the most overrated guys. He’s a sleeze. But I did not ever think of attacking China,” he added.

(Related: Trump Takes Victory Lap After ‘Illegal Witch Hunts’ Against Him Flop: “I Have Been Totally Exonerated”)