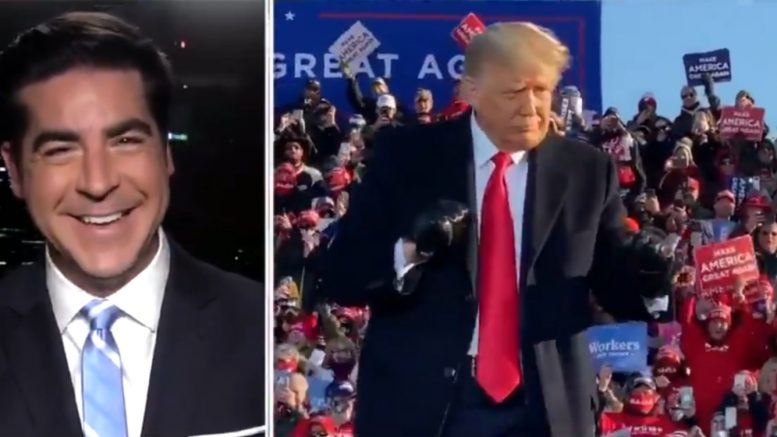 With the big November 3rd contest only a few days away, mainstream polls indicate that the President has closed the gap with Joe Biden, and now trails the former Vice President in battleground states by an average of only 3.1% — a number that Watters thinks is skewed against Trump.

“Personally, I believe Trump is looking even better in the battlegrounds than the mainstream media polls. I don’t believe a lot of these polls. It’s neck and neck everywhere and the President’s in a great position,” Watters said.

He also mentioned that “Republicans are tied or  ahead in early voting” in critical states, such as Wisconsin, Michigan, Ohio, Texas, Arizona, Georgia and Florida.

“Republican enthusiasm is huge and, in Florida, Republicans are wiping out the Democrat early-vote advantage, and they’re at pace to put Biden behind where Hillary was in 2016,” Jesse said.

“The Democrats are getting nervous,” he went on to say before rolling out headlines from mainstream sources and clips from Rep. Debbie Dingell and Michael Moore to back up his claim.

Related Article: Jesse Watters Explains Why The ‘Tide Is Turning’ For Trump & How Biden Just Got Hit With A ‘Double Whammy’

And now as the election is right around the corner, Jesse finds it odd that Democrat-run cities have begun boarding up buildings to prepare for riots.

“There’s only gonna be violence if Biden loses,” Watters said. Video Below

“The people are what make Trump powerful. He’s going to win re-election if the people turn out…if you vote on election day, it’ll be four more years.” #WattersWords pic.twitter.com/JzagWkAvvs