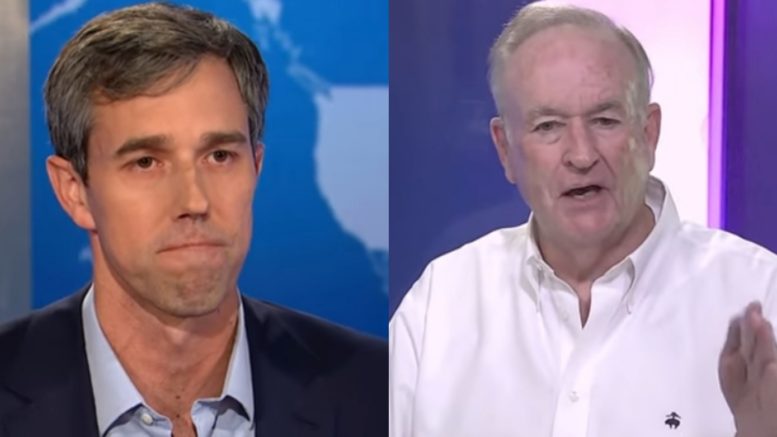 On Tuesday, Bill O’Reilly blasted Democrat Presidential candidate Beto O’Rourke over his latest claim that President Trump is an “asset” of Russia and has a leadership style comparable to Nazi Germany.

Beto initially compared President’s leadership to Nazi Germany while being interviewed by Al Sharpton. He then doubled down on the Nazi remarks and also made his case for why Trump is a Russian “asset” when interviewed by CNN’s Wolf Blitzer a day later.

In his “Message Of The Day,” O’Reilly said Beto “has emerged as one of the most irresponsible and foolish politicians” that he has ever seen.

“Having written two books about Nazi Germany, Killing Patton and Killing the SS, I understand how Hitler and his henchmen assumed power,” Bill said. “They did it by imposing violent terror on the German people, many of whom accepted and even supported the daily atrocities.”

“The only systemic violent terror in the USA is the incredibly imbecilic verbiage of haters like Beto O’Rourke,” he added. “I mean his moronic utterings are cruel and unusual punishment, are they not?” See Below

“Don’t like President Trump? Fine. Your constitutional right. Compare him to mass killers and torturers? Not fine,” O’Reilly declared.

“Disqualifying. Beto O’Rourke is finished in the political arena forever,” he concluded. See Below

Don’t like President Trump? Fine. Your constitutional right. Compare him to mass killers and torturers? Not fine. https://t.co/cMww8sPFio

In ending, here is video of Beto making the negative remarks about President Trump on CNN: