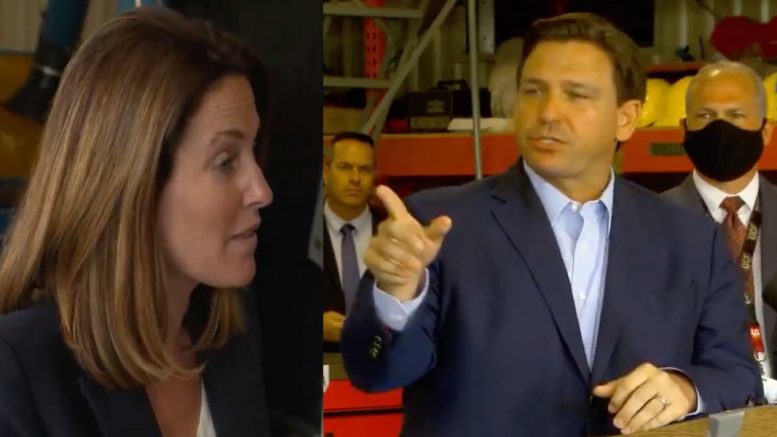 Daily Wire’s Ryan Saavedra reported Sunday that CBS’ “60 Minutes” deceptively edited an exchange with reporter Sharyn Alfonsi, where she had with Florida Governor Ron DeSantis (R) two weeks ago over the way the Sunshine State has rolled out its vaccination program.

In the clip, Alfonsi suggested that Publix, the largest grocery store chain in Florida, had engaged in a pay-to-play scheme with DeSantis where they donated money to his campaign in exchange for him awarding a contract to the grocery store chain to host vaccinations, Saavedra wrote.

CBS edited the interaction between DeSantis and Alfonsi when she showed up to a press conference a few weeks ago and repeatedly confronted the governor. The network cut out a lengthy portion of DeSantis’ response in which he explains what happened and how decisions were made, Ryan Saavedra reported

Sharyn Alfonsi told DeSantis “Publix, as you know, donated $100,000 to your campaign, and then you rewarded them with the exclusive rights to distribute the vaccination in Palm Beach.”

Governor Ron DeSantis responded, “So, first of all, that– what you’re saying is wrong.”

“How is that not pay-to-play?” Alfonsi asked. Video Below

Governor Ron DeSantis explained in detail the steps Florida took to make the decision to partner with Publix:

WATCH: CBS and @60Minutes excluded context from Florida Gov. Ron DeSantis in which he explains the steps his government took to make the decision to partner with Publix on vaccine distribution.

The 60 Minutes version is first, followed by the full answer from DeSantis. pic.twitter.com/2KRQKPLOe7

Campaign finance reports obtained by 60 Minutes show that weeks before Florida Governor Ron DeSantis announced a partnership with Publix grocery stores to distribute the vaccine in its pharmacies, Publix donated $100,000 to his PAC. https://t.co/bS3ZBeET1W pic.twitter.com/BSUlpVbXSP

"What you're saying is wrong," Gov DeSantis tells Sharyn Alfonsi in response to a question about whether the Publix grocery store chain gained influence through a campaign donation on his behalf. "It's wrong. It's a fake narrative," he says. https://t.co/gyrW9hYPTg pic.twitter.com/5rBq7v5VOA

Meanwhile, Publix fired back at the “60 Minutes” segment in a statement, calling the accusation “absolutely false and offensive.”

Former Democratic Florida State Representative Jared Moskowitz also said the allegations that there was a connection between the supermarket’s campaign contributions and the partnership to administer vaccines was “absolute malarkey.”

@60Minutes I said this before and I’ll say it again. @Publix was recommended by @FLSERT and @HealthyFla as the other pharmacies were not ready to start. Period! Full Stop! No one from the Governors office suggested Publix. It’s just absolute malarkey. https://t.co/obkqYcbrzt

Further, Democratic mayor of Palm Beach County, Dave Kerner, said that the 60 Minutes’ reporting is not just based on “bad information” but that it is “intentionally false.”

(Related: Gov. DeSantis On The Emerging ‘Crisis’ At The Southern Border: “This Is Intentional”)

CNN Guest Doctor’s Message To Americans: “Christmas Should Not Be Fun This Year”

Gov. DeSantis Steps To Podium & Slams Joe Biden Over His Sweeping New Mandates, Vows to ‘Stand Up’ Against Them