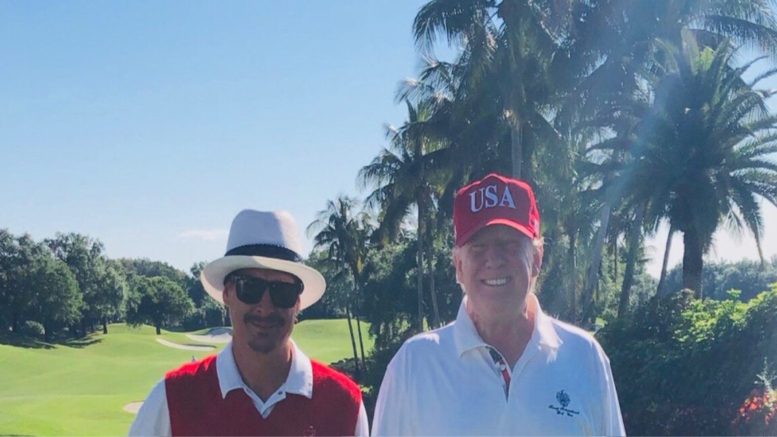 President Trump in is Mar-a-Lago, Florida for the weekend and was spotted on the greens with rock legend, Kid Rock.

Kid Rock took to Twitter unafraid to show off a photo of him and the President on the golf course where he was rocking a patriotic outfit for the occasion.

Kid Rock tweeted on Saturday about his time on the green with President Trump, saying it had been “another great day on the links!”

He wrote, “Another great day on the links! Thank you to POTUS for having me and to EVERYONE at Trump International for being so wonderful.”

Kid Rock added, “What a great man, so down to earth and so fun to be with!! KEEP AMERICA GREAT!! -Kid Rock”

He was also sporting American flag pants and President Trump is smiling in a red “USA” cap. (See Below)

An avid golfer who is known to often mix his play with work, the president has played the game with a gamut of notaries, from professionals like Tiger Woods and Jack Nicklaus to politicians like Lindsey Graham and Rand Paul to world leaders like Japanese Prime Minister Shinzo Abe.

Kid Rock is a notable exception to the many liberal celebrities and musicians who are vocal enemies of the president and his policies. (See Below) 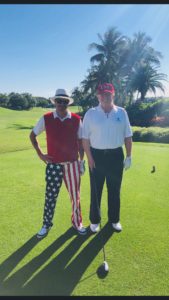 We leave you with “Born Free” by Kid Rock:

(Related: Alice Cooper RIPS Politicized Musicians: ‘You’re Telling Your Fans Not To Think For Themselves!’)

Beto O’Rourke Accuses Trump Of ‘Encouraging’ Violence, Candace Owens Swipes Back: ‘You Will Never Be President’