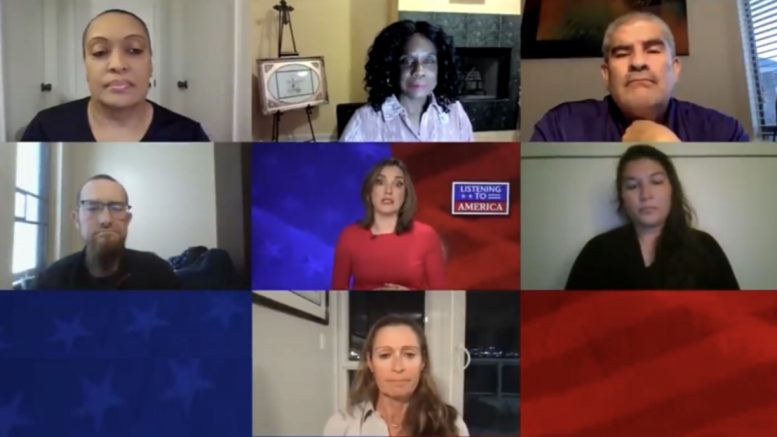 During a CBS “Face the Nation” focus group discussion, host Margaret Brennan spoke with American voters over zoom, weighing in on COVID-19, the economy, and the government, while simultaneously appearing to prop up the Biden administration, despite the the many failures in the first year.

Three of the panelists reportedly voted for 79-year-old Joe Biden, while the other three identified as Trump supporters. In the discussion, all six panelists indicated their lives have not gotten better under Democrat policies.

All six panelists agreed that America is not in better place, appearing to shock CBS host Margaret Brennan:

After Biden's disastrous first year in office, not a SINGLE participant in Face the Nation's focus group believes America is in a better place. pic.twitter.com/1NnlQAz1gE

Chelsea, a Biden voter, told the CBS host, “I think I am more skeptical now. My life has not improved. COVID has not improved. Biden has not stuck to any of his promises. I don’t think anyone in Washington is really for working people.”

After one year "of unified Democratic control," not a single CBS News focus group participant says Washington understands their concerns.

The panelists also agreed that the economy has not improved under Biden, while CBS’ Margaret Brennan tried to claim “the direction of the economy recovery is happening”.

Not one CBS focus group participant says the economy has improved in Biden's first year.

"I go to the grocery store now—I'm paying double the amount I was paying even a few months ago. Everything's gone up!" pic.twitter.com/5vYfCDoJIk

Another panelist said she “needs the government to stop spending money on things that are worthless” to the American people.

A 2020 Biden voter SLAMS Biden's spending priorities as a "waste of money."

"I need for the government to stop spending so much money on things that are worthless." pic.twitter.com/aVevCOcXEv

Biden has spent at least $2 trillion "with the intention of helping working people. Are you saying it just hasn't made a difference in your life?"

“Certainly not in my life.”

“It really hasn’t made a difference at all.” pic.twitter.com/HREudw7N90

(Related: Chuck Todd: Biden Is ‘No Longer Seen As Competent & Effective’ – His Low Approval ‘Leads to a Shellacking for the Party in Power’)

Trump Alerts House & Senate GOP Leaders: Do Not Approve ‘The Democrat Trap Of The January 6 Commission’