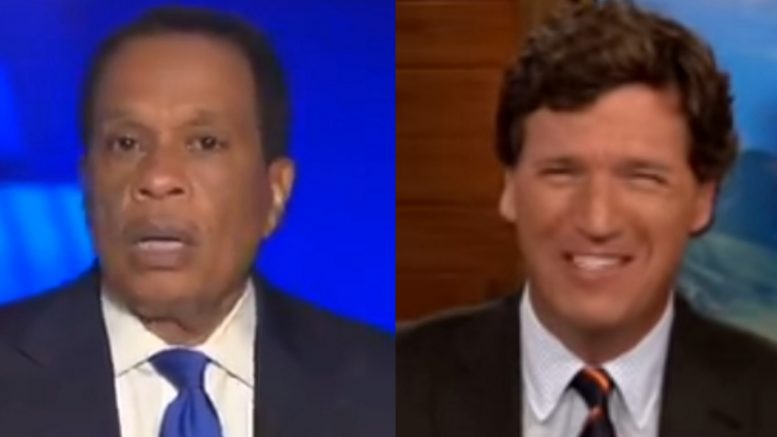 Fox News host Tucker Carlson put a sudden halt to Juan Williams’ commentary on Monday, while making a special appearance on The Five,

The panel was discussing Transportation Secretary Pete Buttigieg’s flip flop on a mileage tax plan that he initially proposed to help foot an infrastructure bill that is in the process of being hammered out.

Related Article: Tucker Gets The Last Laugh After CNN Implies He’s Racist For How He Mispronounced Kamala’s Name

Just last week, Buttigieg floated the idea of taxing people based on miles driven in addition to the traditional gas tax that’s collected at the pump – a plan he said had “a lot of promise”, only to walk back the idea when he told CNN’s Jake Tapper on Monday that it is no longer under consideration.

Unsurprisingly, Juan William attempted to cover for Buttigieg’s flip flop by saying the Transportation Secretary “walked this back aggressively” because of the impact it would have on the trucking industry and people who live in rural areas.

He went on to tout the pending infrastructure bill and suggested “the problem comes from Republicans” who question how it will be paid for.

As a way of mocking the Republican party, Williams said, “‘You want to raise taxes on the rich, and we don’t want to drive up deficits if we’re not cutting taxes for the very rich’ — that’s the only time they’ll do that.”

Tucker interrupted Juan’s rant to give someone else a chance to weigh in, but Williams replied: “I’m gonna tell you something…”

Tucker fired back. “No, no…you haven’t told me anything actually — not one thing!” he exclaimed before laughing hysterically and handing it off to Dana Perino. Video Below

TUCKER CARLSON: “You haven’t told me anything actually *laughs* not one thing.”
pic.twitter.com/E1FLfp0eoa

Beto Tells Immigrants America Was Founded On ‘White Supremacy’, Gutfeld Fires Back: ‘He’s So White, Wonder Bread Could Sue Him For Plagiarism’