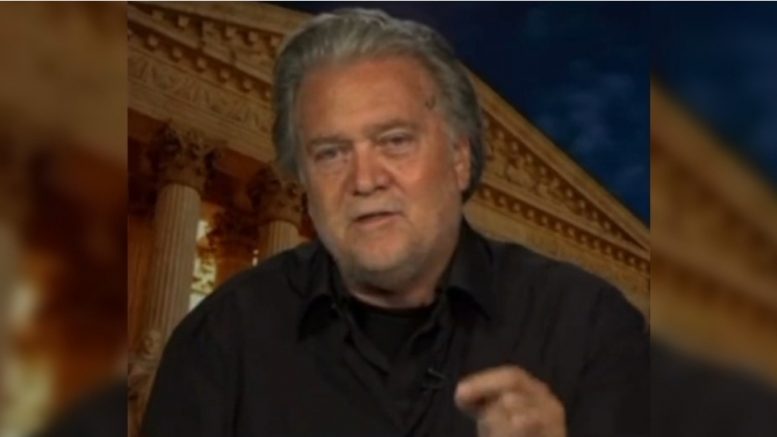 Steve Bannon is vowing to “never back off” after being convicted of contempt of Congress charges, as the jury in a U.S. District Court returned two guilty verdicts against him after less than three hours of deliberation on Friday.

“The pair of guilty verdicts from a D.C. jury for Bannon over his defiance of a subpoena from the House committee probing the Jan. 6 attacks and former President Donald Trump’s campaign to overturn the 2020 election results are sure to grab the attention of other witnesses still resisting the panel’s requests or who may have given less-than-forthcoming testimony up to this point,” Politico reported. “However, any actual jail time for Bannon in the case could be modest and may be years away. And the significant restraints the judge put on the defenses Bannon could offer at trial raise issues that could find traction at an appeals court or even the Supreme Court.”

Appearing for his first interview since being convicted, Mr. Bannon appeared to be unphased by the guilty verdicts when the following exchange took place between him and Fox News host Tucker Carlson:

Tucker: “You’ve just been convicted. How do you feel about going to jail? Are you confident you would be safe there, for example?”

“I support Trump and the Constitution and I’m not backing off one inch. If I go to jail, so be it. But look, we have a long appeals process… We’ve got a long appeals process. I think the law is with us on a number of situations and I think some of this is really gonna be adjudicated, maybe even higher in the appellate courts. I’m feeling very confident that we’re 100% right in the law, but we’re going to fight this all of the way.” Video Below

Steve: "I'm not going to back down one inch, at all." pic.twitter.com/X6AtKhfYJP

Flashback: Sidney Powell Claims to Have a ‘Number of Smoking Guns’ to Present in Court & May Require ‘Witness Protection’