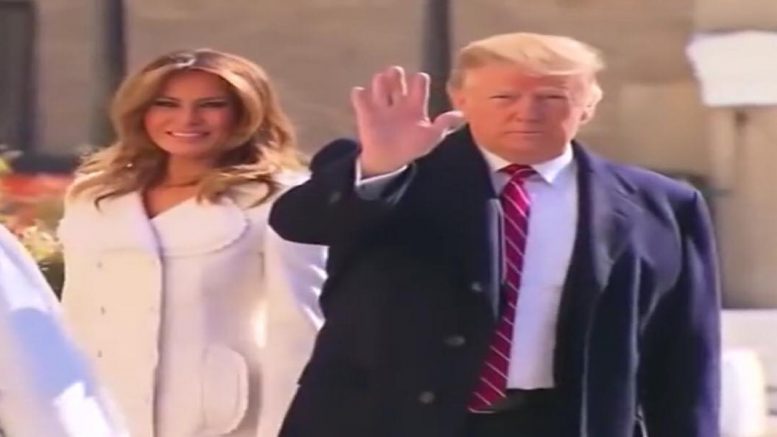 Former President Donald Trump released a statement Monday via email, informing Americans that he and the former first lady have officially launched their website: “The Office Of Donald J. Trump”.

The president’s website “will allow individuals to submit correspondence, scheduling requests, and press inquiries for President and Mrs. Trump” according to the president’s email.

The statement from the 45th President reads as follows:

President Donald J. Trump and Mrs. Melania Trump are pleased to announce the launch of 45Office.com.

The official website of the 45th President of the United States will allow individuals to submit correspondence, scheduling requests, and press inquiries for President and Mrs. Trump.

President and Mrs. Trump are continually strengthened by the enduring spirit of the American people, and they look forward to staying in touch. Continued Below 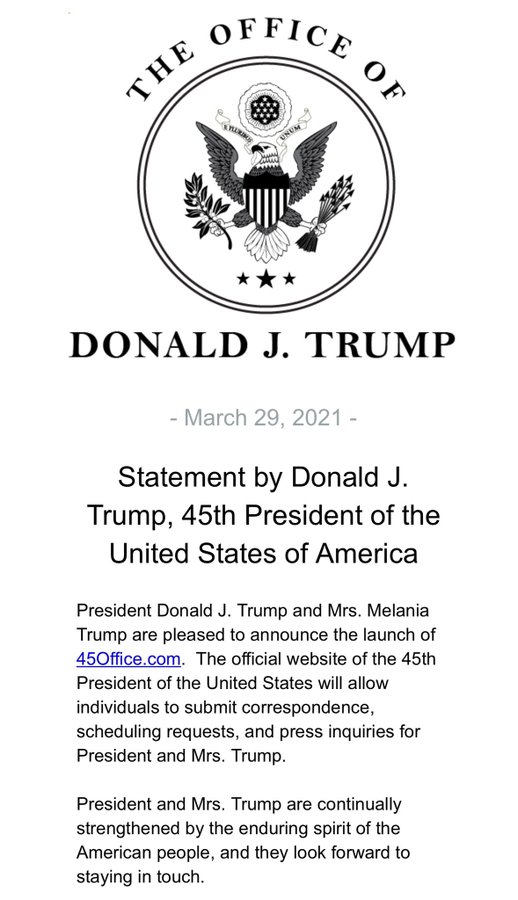 The website states, “The Office of Donald J. Trump is committed to preserving the magnificent legacy of the Trump Administration, while at the same time advancing the America First agenda. Through civic engagement and public activism, the Office of Donald J. Trump will strive to inform, educate, and inspire Americans from all walks of life as we seek to build a truly great American Future.”

“Through this office, President Trump will remain a tireless champion for the hardworking men and women of our great country – and for their right to live in safety, dignity, prosperity, and peace,” the Office of Donald Trump says. Continued Below

Under the “About” section of The Office of Donald J. Trump, it states in part:

He mobilized voters with massive rallies, reached America’s hearts and minds with his vision for national rejuvenation, and overcame virtually every entrenched power structure—political and financial—and achieved a decisive victory, winning states no Republican presidential candidate had won in decades.

The forgotten men and women of America were forgotten no more because we finally had a President who put America First. … President Trump knows that as long as we remain faithful to our citizens, our country, and our God, then America’s best days are yet to come.

Under the “About” section of The Office of Donald J. Trump, it also describes the former first lady and states in part:

Melania Trump is married to the 45th President, Donald J. Trump and the mother to their son, Barron Trump. She is the second First Lady born outside of the United States and the only First Lady to become a naturalized United States citizen.

BE BEST, Mrs. Trump’s awareness campaign, focused around the well-being of children and highlighting the people and programs dedicated to ensuring a better future for our next generation.

The campaign has three pillars: well-being, which includes the social and emotional health of children; online safety, which focuses on educating families on how to protect children online and promote healthy online habits; and opioid abuse, focused on protecting our most vulnerable from the effects of drug abuse while promoting resources and programs for all who struggle with addiction.

The “Contact” section of The Office of Donald J. Trump allows you to share your thoughts, schedule requests, and request a greeting.

The contact section also states: “Donald J. Trump and Melania Trump enjoy hearing from the American people. In an effort to ensure that your requests and comments are received in a timely manner, it is strongly encouraged that you submit all correspondence online. President and Mrs. Trump prefer not to receive letters, gifts, inquiries, and invitations through the mail.”