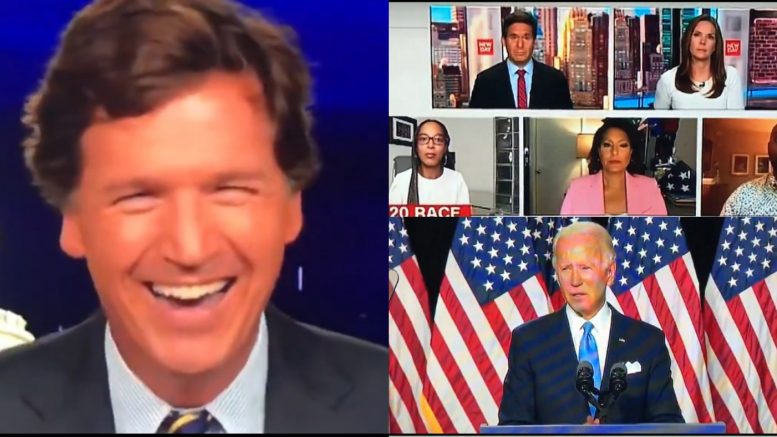 Tucker Carlson responded in classic fashion after catching heat for the way he said Senator Kamala Harris’s name during his nightly program.

On Wednesday, CNN panelists spent an entire segment chastising Tucker and implied that he is racist all because he pronounced “Kamala” the wrong way.

While Tucker claimed it was unintentional, CNN employees, including Oliver Darcy and Kirsten Powers, later chimed in and slammed the Fox News host over his mispronunciation.

“Tucker says this was unintentional, but he does often mispronounce the names of people he is critical of. It’s sort of a thing on his show,” Darcy wrote. “Seems pretty intentional!”

Kirsten Powers tweeted: “It’s just basic journalism to learn the correct pronunciation of names of leaders. It’s not like Kamala appeared on the scene yesterday so it’s hard to believe it’s “unintentional”…but of course somehow Tucker is the victim in this story..”

Tucker, however, got the last laugh as he posted a video clip of Joe Biden mispronouncing Kamala’s name while speaking about her on Wednesday. Video Below

In ending, here’s a clip of Tucker from his Wednesday program discussing how radicals can’t wait to run a Biden administration if he wins:

“Oh he’s movable, that’s the whole point of Joe Biden. But the country is not movable. It is not just an idea, it’s a physical place…& now a small group of unhappy people is wrecking it & no one is stopping them.” pic.twitter.com/GpJKIuchvo