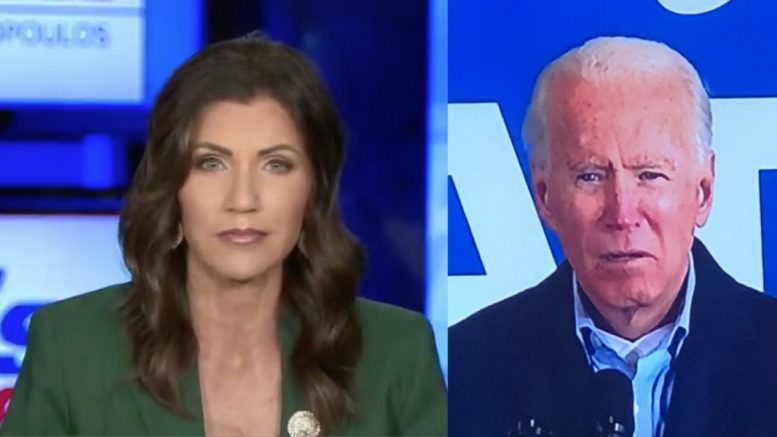 Governor Kristi Noem (R-SD) spoke with George Stephanopoulos Sunday during ABC’s “This Week”, voicing her concern of voter fraud in the presidential election.

Asked if she was prepared to work with presumptive Democratic President-elect Joe Biden to combat a surge of coronavirus cases in her state, Governor Noem, informed Stephanopoulos, “This is all premature. This is a premature conversation because we have not finished counting votes. There are states that have not been called.”

Governor Noem reminded the ABC anchor that “back in 2000, Al Gore was given his day in court”, adding, “We should give President Trump his day in court and let the process unfold, because George, we live in a Republic.”

“We are a government that gets its power from the consent of the governed, that is the people. They give their consent on election day. Election day needs to be fair, honest, and transparent. And we need to be sure that we had an honest election, before we decide who gets to be in the White House the next four years,” she explained.

Pressed if she had any evidence of widespread fraud in the election, Governor Noem responded, “People have signed legal documents, affidavits, stating that they saw illegal activities, and that is why we need to have this conversation in court. The New York Times itself, said that there were clerical errors. If you look at what happened in Michigan, we had computer glitches that changed Republican votes to Democrat votes. You look in Pennsylvania, dead people voted in Pennsylvania.”

“I don’t know how widespread it is, I don’t know if it will change the outcome of the election, but why is everybody so scared just to have a fair election and find out? We gave Al Gore 37 days to run the process before we decided who was going to be president. Why would we not afford the 70.6 million Americans that voted for President Trump the same consideration? If Joe Biden really wants to unify this country, he would wait and make sure that we can prove we had a fair election,” said the South Dakota governor. Continued Below

Stephanopoulos pointed out that Al Gore was behind by 500 votes in Florida in the 2000 election, while Biden leads in multiple states by tens of thousands of votes. “That is not close. That is not within the margin that elections are usually turned around on,” he said.

“And many, many more states are in play this time around,” Governor Noem replied. “That’s what I think is interesting, is this declaration from some individuals saying it was an overwhelming victory for Joe Biden. It simply wasn’t, because you have so many of these states that are still in play. All I’m asking for, George, is that we don’t break this country.”

“When you break the process on which we elect our leaders, you will break America forever,” she said. “This isn’t just about this election. This is about every election in the future and the fact that the American people, the everyday people who get up and work hard, that are suffering through this pandemic, that have tragically lost family members, that they need to know at least America still functions and we care about doing things right.” Video Below

“It starts with providing evidence. You still have not provided that,” Stephanopoulos said, then ended the interview, saying “We are out time”.

Pressed by @GStephanopoulos on whether she has any evidence to support Pres. Trump’s election claims, GOP North Dakota Gov. Kristi Noem does not provide any evidence, but also refuses to acknowledge that Joe Biden as the apparent winner of the presidency. https://t.co/RxWyF4Jwuf pic.twitter.com/VMNUeml0On

If Joe Biden really wants to unify this country, he should wait until we can ensure that we had a fair election.

Oh, and it's SOUTH Dakota. https://t.co/Yh4erkUstH

So many serious election integrity concerns: