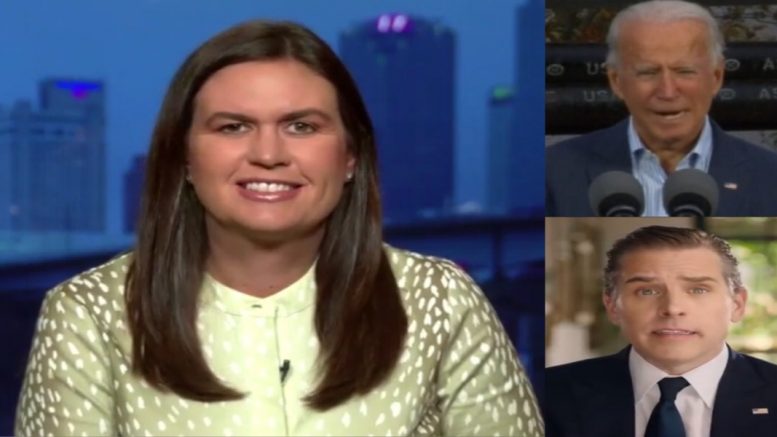 Former White House press secretary Sarah Huckabee Sanders weighed in on the story from the New York Post, which published emails alleging that Hunter Biden introduced his father, Joe Biden, to a top executive at Ukrainian natural gas firm Burisma Holdings in 2015– one year before his father reportedly pressured the country’s government to fire a prosecutor who had launched an investigation into the company.

One of the people on an explosive email thread allegedly involving Hunter Biden has also corroborated the veracity of the messages, which appear to outline a payout for former Vice President Joe Biden as part of a deal with a Chinese energy firm, Fox News reported.

One email, dated May 13, 2017, and obtained by Fox News, includes a discussion of “remuneration packages” for six people in a business deal with a Chinese energy firm. The email appeared to identify Hunter Biden as “Chair / Vice Chair depending on agreement with CEFC,” in an apparent reference to now-bankrupt CEFC China Energy Co.

The email includes a note that “Hunter has some office expectations he will elaborate.” A proposed equity split references “20” for “H” and “10 held by H for the big guy?” with no further details. Fox News spoke to one of the people who was copied on the email, who confirmed its authenticity.

Sources told Fox News that “the big guy” is a reference to the former vice president. Continued Below

“If he did and he’s compromised, it will be very difficult for him to stand up to China if he were to be elected president. That is the question every American should be concerned about and should want an answer to,” Sanders explained.

“It’s very simple: the media needs to ask Joe Biden whether or not the emails are real and whether or not he accepted or his son Hunter accepted money on his behalf. And they need to keep asking until they get an answer the same way that they’ve done to President Trump every single day on completely unsubstantiated claims and attacks,” the former White House press secretary said. Video Below

“They were relentless for more than 2 and half years. They spent every single day badgering him, everyone around him, and everyone that worked for him to ask about Russian collusion, which we all know now was nothing but a huge hoax,” she continued.

The media was relentless in asking, yet they give Joe Biden a free pass on this– they let him answer one time and move on quickly. They need to hammer this home and need to get an answer,” Sanders recommended.

The liberal media clearly hates @realDonaldTrump more than they love a free and independent press, and openly serve as the propaganda arm of the Biden campaign, throwing away what little remained of their credibility to interfere in an election and try to help their candidate win

(Related: Biden Campaign Surrogate On Hunter’s Alleged Emails: “I Don’t Think Anybody Is Saying They Inauthentic Or Not”)