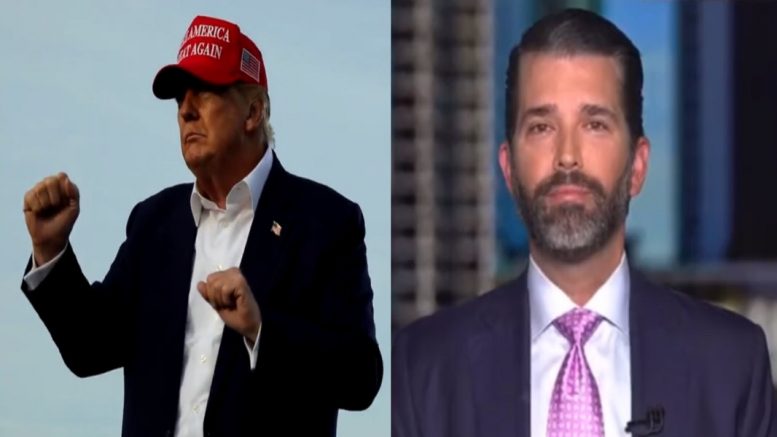 During a Fox News interview on “Sunday Morning Futures”, Donald Trump Jr. said that hopes his father runs again for president in 2024, but said the only thing that would prevent the former president from announcing a run, is if his health took a turn.

“You know, if he wakes up one morning and feels like Joe Biden looks like on a daily basis, he’ll probably say, ‘Now’s not the time'”, he said.

“But I do truly believe he’s the one guy that still has that fight. I mean, when you’re that guy who, all by yourself out there taking all the slings and arrows, it’s not that easy,” Trump Jr. continued.

“But now, I think people have woken up. … They’re watching mothers be called domestic terrorists by the DOJ and FBI for simply not wanting to teach indoctrination in their schools. They’re getting it. I think if Donald Trump goes out there with millions and millions of Americans behind him, unafraid, willing to speak up and stand up, I think that’s an unstoppable combination. And I think it would be awesome for 2024,” he added.

.@DonaldJTrumpJr says he hopes President Trump runs in 2024 but he is been realistic about it. If he wakes up one day feeling like Joe Biden looks he’ll probably say now is not the time. pic.twitter.com/yW2AVg82f6

In April, Trump confirmed he has told advisers that his health would factor into his final decision of running again in 2024.

“You always have to talk about health. You look like you’re in good health, but tomorrow, you get a letter from a doctor saying come see me again. That’s not good when they use the word ‘again’, he told the Washington Post, adding that he was currently in good health.

But he went on to again hint that he planned to stand. “I don’t want to comment on running, but I think a lot of people are going to be very happy by my decision”, he said, adding, “Because it’s a little boring now”.

Related: Trump Fires Back as Biden Claims ‘MAGA Crowd’ is the ‘Most Extreme Political Organization’: ‘MAGA is Saving America’