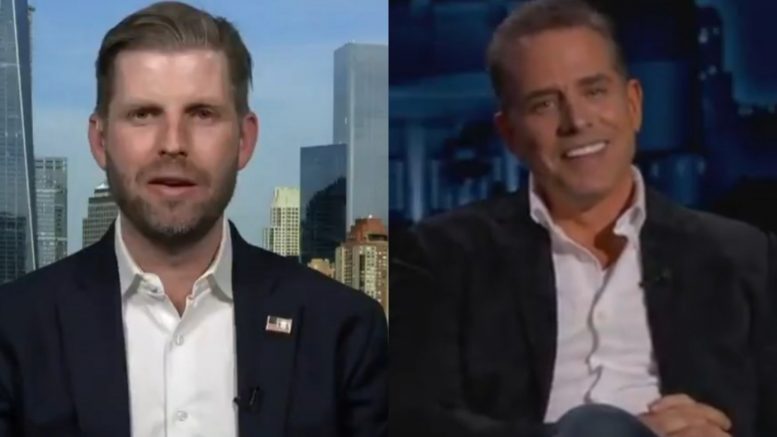 Eric Trump sounded off on the media’s soft coverage of Joe Biden’s son, Hunter Biden, after months of controversies that has surrounded him.

Hunter has been making media appearances over the past week to promote his memoir “Beautiful Things” and has experienced very little to almost no pushback from the media, despite mounting negative information discovered on a laptop allegedly belonging to him and after reportedly lying on an ATF background check form.

“Frankly, I feel bad for him,” Eric said. “He’s a troubled kid. I think he probably has some really bad parenting.”

Trump went on to point out that nearly every in America “has known somebody who has fallen” to substance or alcoholism and his heart goes out to them, but it’s unfair the way the media has “coddled” Hunter compared to how negatively they treated the Trump family despite their clean history.

“When you look at the way that the media has coddled him, right — drugs, crack, prostitutes, lying on ATF gun form, taking millions of dollars out of China while his father was vice president, taking millions of dollars out of Ukraine while his father was president, profiting off of government, all of these kinds of schemes, some of the other things on the laptop… go on and on,” Eric said.

“And then you see how how he’s coddled. And then you look how Donny, Ivanka and I and our family including Barron and including Tiffany… who have lived incredibly clean lives, who have never fallen for any of that stuff, who get up every single day — we’re the first people at work, we’re the last person to leave. We’ve lived very, very honest lives, and you see how we’re attacked every single day,” he continued.

“You see how we’re attacked by the media. You see how they weaponize the legal system against us, how they come after us every single day, how they criticize us, how they parody us on Saturday Night Live. We’ve lived very honest lifestyles, we’ve lived clean lifestyles. We haven’t gotten into trouble. We’ve never been to jail… You look at the discrepancy and you see how we’re treated versus how he’s treated, and it really kind of shows kind of the… unequal scales of justice in this country,” Trump concluded. Video Below