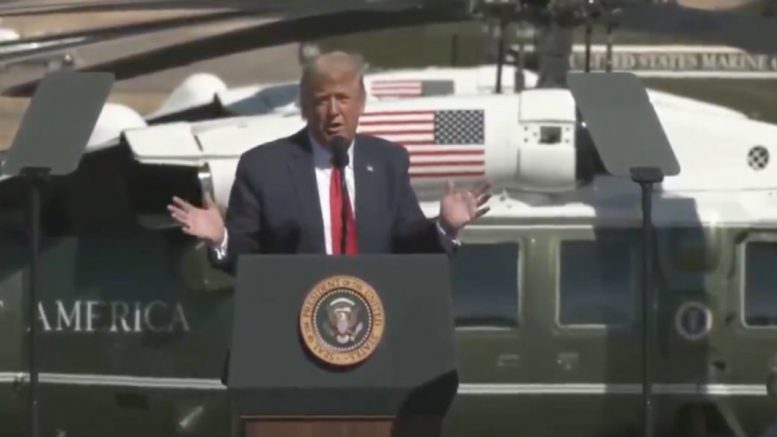 While delivering remarks Monday during a campaign rally in Prescott, Arizona, President Donald Trump slammed CNN, claiming all the network covers is “COVID”, suggesting they are “trying to talk everybody out of voting”, then jokingly called CNN “dumb bastards”.

“You know why? They’re trying to talk everybody out of voting,” the Commander in Chief said.

“People aren’t buying it CNN, you dumb bastards– they’re not buying it,” he jokingly expressed, prompting the crowd to cheer.

“That’s all they talk about,” Trump continued. “I watched this guy, he’s got lousy ratings. Fredo, you know, Fredo? He’s got horrible ratings. He’s talking about the pandemic.”

“That’s all they talk about, you know? He said he had it. I’m not sure he had it. He went to the basement, it’s the only time his ratings went up to see what was gonna happen,” he added. Video Below

CNN anchor Chris Cuomo was accused of staging his own emergence from the basement in his Hamptons home where he had been recovering from the coronavirus in April.

Over Easter weekend, however, Cuomo was also reportedly involved in a heated altercation that took place at his East Hampton property after a bicyclist claimed that the CNN anchor was violating quarantine guidelines that were being enforced by his brother, New York Governor Andrew Cuomo.

And before the media gets itself into a frenzy over the president’s remarks in Arizona, it’s worth noting that former Vice President Joe Biden spoke to service members at a military base in 2016 before he instructed them to clap and appeared to address the airmen “jokingly” as “stupid bastards.”

Joe Biden said in his remarks to the service members, “Clap for that, you stupid bastards”.