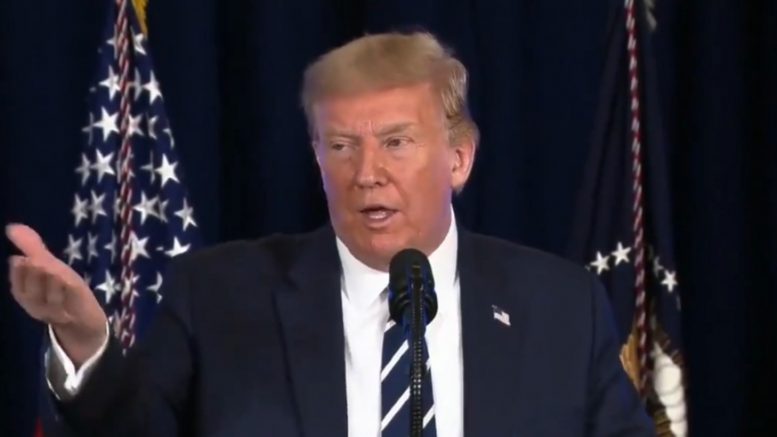 On Friday, a reporter bashed Trump supporters who attended the President’s latest press briefing in New Jersey, claiming that they weren’t following the state’s coronavirus-related guidelines.

Dozens of patrons could be heard in the background as President Trump answered questions from the press at the Trump National Golf Club in Bedminister, NJ.

“In this room, you have dozens of people who are not following those guidelines in New Jersey,” the reporter told President Trump.

Trump fired back as the crowd booed the journalist.

“You’re wrong on that because it’s a political activity. There are exceptions. Political activity — and it’s also a peaceful protest,” Trump said. “They asked if they could be here. To me, it looks like they all have — pretty much all have masks on.”

The small crowd then erupted in cheers as Trump said, “They know the news is fake. They understand it better than anybody.”

“If the press in this country were honest, [if] it wasn’t corrupt, if it wasn’t fake, our country would be so much further ahead, but we’re doing really great,” he declared. Video Below

WATCH: Reporter tries to call out Trump supporters for not following coronavirus guidelines.

The exchange between Trump and the reporter comes in wake of nationwide anti-police protests that’ve been taking place across the country for several weeks, many of which have turned violent, yet face barely any scrutiny from members of the press, who often refer to them as “peaceful protests.”

Peter Doocy on Durham’s Filing Implicating Clinton Camp Lawyers: ‘This Story Likely Is Not Going Away’