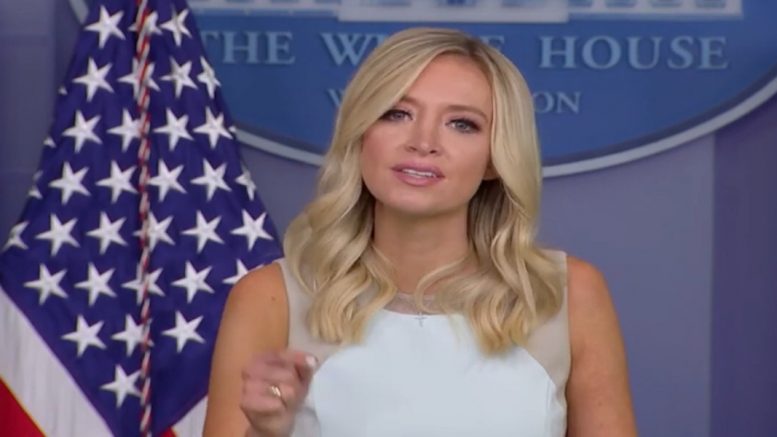 During Monday’s press briefing, White House Press Secretary Kayleigh McEnany scolded reporters for failing to ask a single question regarding a violent weekend, after an 8-year-old girl died in Atlanta, following a surge in gun violence.

McEnany spent most of the press briefing responding to questions from reporters in regards to a tweet that President Trump sent out earlier in the day over NASCAR driver Bubba Wallace.

President Trump tweeted on Monday: “Has @BubbaWallace apologized to all of those great NASCAR drivers & officials who came to his aid, stood by his side, & were willing to sacrifice everything for him, only to find out that the whole thing was just another HOAX? That & Flag decision has caused lowest ratings EVER!

Many questions directed to the White House press secretary were about the President’s tweet, and McEnany pointed out to the reporters in the room how they overlooked a chaotic weekend filled with violence in many American cities.

An 8-year-old girl, identified by police as Secoriea Turner, was killed during a July 4 shooting near the Atlanta Wendy’s where a police officer shot and killed Rayshard Brooks last month.

Police said Turner was riding in a car with her mother and another adult when a group fired multiple times at the vehicle, hitting the girl. In Chicago, a city known for gun violence, more than 67 people were shot over the holiday weekend and at least 13 were killed, including a 7-year-old girl and a 14-year-old boy, Fox News reported. Continued Below

The New York City Police Department saw at least 44 shootings, from which there were 63 victims, from July 3 to July 5, according to data provided by the NYPD. Several shootings in the city of Baltimore over the weekend also left at least one person dead and eight injured, per Fox News.

“I’d end with this: I was asked probably 12 questions about the Confederate flag. This president is focused on action, and I’m a little dismayed that I didn’t receive one question on the deaths that we got in this country this weekend,” McEnany informed reporters.

“I’ll leave you with this remark by a dad. It broke my heart, a dad of an 8-year-old last in Atlanta this weekend, ‘They say Black lives matters. You killed a child, she didn’t do nothing to nobody’ was his quote,” the press secretary pointed out.

McEnany told reporters before quickly exiting the podium: “We need to be focused on securing our streets, making sure no lives are lost, because all black lives matter, that of David Dorn and that of this 8-year-old girl. Thank you.”

.@PressSec slams the Media for obsessively asking questions about the Confederate Flag and ignoring those lost in violence over the weekend including 5 children. pic.twitter.com/GydJtdwnwG

**Update at 8:30 PM central. The press secretary tweeted the family who lost their 8 year old child:

Praying for Secoriya Williamson, Charmaine Turner & their beautiful 8-year-old, Secoreia, who should still be here along with the other 4 children lost this weekend pic.twitter.com/JnLxWbU9JD