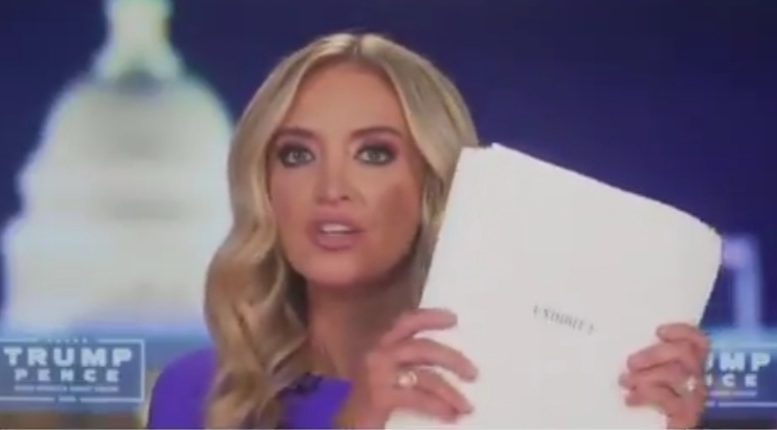 White House Press Secretary Kayleigh McEnany answered the call from critics to “show evidence” of election fraud that’s been alleged in the aftermath of the 2020 election.

While appearing on Tuesday’s airing of Hannity, Kayleigh held up 234 pages of sworn affidavits coming from people all around the country, where they describe their eye-witness account to potential fraud-related activities that were allegedly encountered during the election process.

Related Article: Corey Lewandowski: “This Race Is Far From Over & Donald Trump Is Going To Be Victorious”

“We keep hearing the drumbeat of ‘Where is the evidence?’…right here, Sean. 234 pages of sworn affidavits — these are real people, real allegations, signed with notaries,” Kayleigh said as she held up the affidavits.

“They are alleging — this is one county, Wayne County, Michigan — they are saying there was a batch of ballots, where 60% had the same signature. They are saying that 35 ballots had no voter record — that they were counted anyway, that 50 ballots were run multiple times through a tabulation machine, that one woman said her son was deceased but, nevertheless, somehow voted.”

She continued, “These are one of many, many allegations in one county — in a county, no less, where poll watchers were, in many cases, threatened with racial harassment. They were pushed out of the way, and Democrat challengers were handing out documents — how to distract GOP challengers.”

“These are real and anyone who cares about transparency and the integrity in the system should want this to pursue to the discovery phase,” McEnany concluded.

Ronna McDaniel followed up by mentioning that over 70% of Republicans don’t have faith in the 2020 election results as there are now over 11,000 “incident reports” related to the election process that have yet to be investigated on top of over 500 signed affidavits across states.