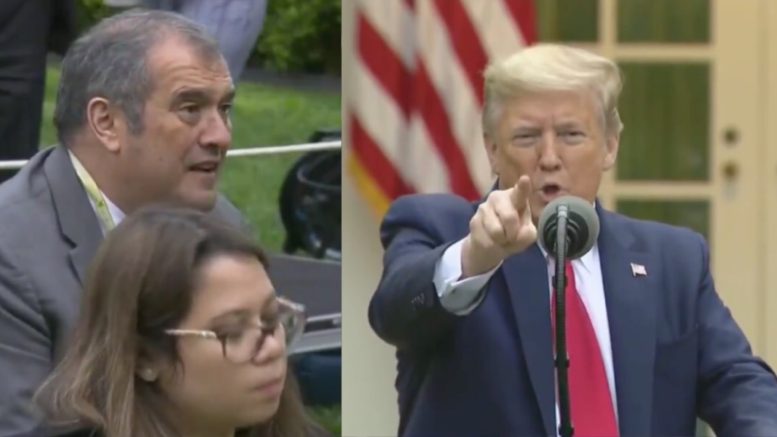 Tuesday during the White House Coronavirus Task Force briefing, President Trump called out Playboy’s White House correspondent, Brian Karem, for being a “showboat” and a “loudmouth”.

The president’s remarks directed at Karem, ensued as the Playboy reporter insisted on interrupting the president after being asked to be “quiet” by the Commander in Chief.

“So the governors, excuse me, excuse me. I know your question.” the president told the Playboy reporter. “You ready?”

“The governors are supposed to do testing. It’s up to the governors,” President Trump explained, then proceeded to move on to another reporter.

Karem wanted to ask another question, but the Commander in Chief stopped him in his tracks. “Quiet. Quiet. Quiet.” Trump told him. Continued Below

“The governors are doing the testing,” the president told Karem again as the Playboy reporter kept insisting on talking. “It is now not up, and it hasn’t been up to the federal government.”

“The question is about social distancing, sir”, Karem yelled, which prompted the president to fire back.

“I told them when they put this guy here, it is nothing but trouble. He’s a showboat. If you keep talking, I’ll leave and you can have it out with the rest of these people… Just a loudmouth,” President Trump expressed. Video Below

Last summer, guests were invited to a social media summit at the White House and Sebastian Gorka and Joy Villa had a confrontation with Brian Karem after the President gave a speech in the Rose Garden.

“You’re a punk! You’re not a journalist! You’re a punk!” Gorka told Karem after the Playboy reporter told the President’s guests they were “possessed by demons.”

“Received an email today shortly before 5 p.m. from the WH: as of Monday afternoon my press pass is suspended for 30 days,” Karem had tweeted following the confrontation. “Yes. I can and will appeal this decision.”

(Related: James Woods: “A Dishonest, Biased Press, Hijacked By The DNC, Is Not Only Unnecessary, But A Danger To A Free Republic”)