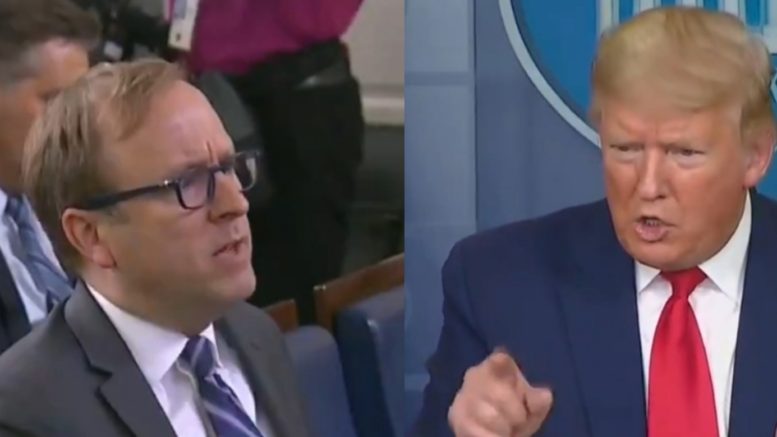 President Trump addressed the topic of mail-in voting while taking questions from the press at his Friday briefing.

ABC’s Jonathan Karl asked the president if states should be prepared to embrace the concept in the coming months.

Karl asked, “Do you think every state in this country should be prepared for mail-in voting?”

“No, because I think a lot of people cheat with mail-in voting,” Trump replied. “I think people should vote with ID — voter ID. I think voter ID is very important,” he added. And the reason they don’t want voter ID is because they attempt to cheat…You should have a picture for voting. It should be called voter ID. They should have that, and it shouldn’t be mail-in.”

“It shouldn’t be mail-in voting,” Trump continued. “It should be you go to a booth and you proudly display yourself. You don’t send it in the mail where people pick up — all sorts of bad things can happen by the time they sign that, if they sign that, by the time it gets in and is tabulated.”

“No, it shouldn’t be mailed in. You should vote at the booth and you should have voter ID,” he reiterated. “Because when you have voter ID, that’s the real deal.” Video Below

Related Article: Acosta Questions Why The U.S. Doesn’t Have Enough Masks & Medical Equipment, Trump Fires Back: “The Shelves Were Empty”

The idea of mail-in voting is being heavily pushed by Democrats, including Joe Biden and House Speaker Nancy Pelosi, in wake of the coronavirus outbreak.

Here is video of Speaker Pelosi disclosing her effort to “get more resources to vote-by-mail”:

Vote-by-mail is essential to protecting the future of our democracy as we confront this public health crisis. There is no legitimate argument against enacting it. #LSSC pic.twitter.com/WPgOgIivK0