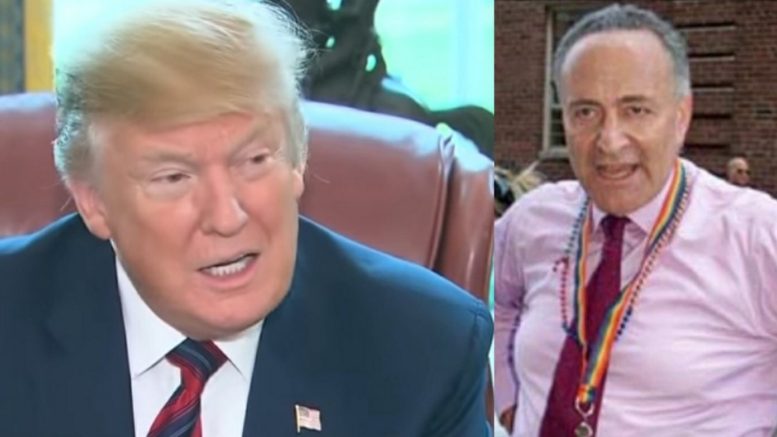 President Donald Trump responded to Senate Minority Leader Chuck Schumer (D-NY) in a scathing letter on Thursday for failing to prepare New York for the coronavirus crisis, telling the New York Senator that he was too focused on the “ridiculous impeachment hoax”, and that he’s been “missing in action”.

Earlier in the day, Schumer took to Twitter with an attached letter of his own addressed to the Commander in Chief, writing: “Dear President Trump: You need to designate a senior military officer as ‘czar’ with broad and government-wide authority to lead both production and distribution of desperately needed medical equipment NOW.”

“While companies that volunteer to produce ventilators and PPE are to be commended and are appreciated, America cannot rely on a patchwork of uncoordinated voluntary efforts to combat the awful magnitude of this pandemic,” Schumer wrote. “It is long past the time for your administration to designate a senior military officer to fix this urgent problem.”

Schumer also tweeted on Wednesday: “President Trump: You need to use the Defense Production Act to produce more medical supplies and equipment NOW. I called for this 2 weeks ago! And you need to appoint a czar like a military commander to lead the effort to make and get the supplies where they’re needed ASAP.”

The Commander in Chief responded back to Schumer in a scathing letter Thursday, thanking him for his “Democratic public relations letter and incorrect soundbites”.

He outlined four areas his administration has taken to leave no stone unturned, pertaining to the coronavirus crisis. (Continued Below)

“If you spent less time on your ridiculous impeachment hoax, which went haplessly on forever and ended up going nowhere (except increasing my poll numbers), and instead focused on helping the people of New York, then New York would not have been so completely unprepared for the ‘invisible enemy'”, President Trump wrote.

“No wonder AOC and others are thinking about running against you in the primary. If they did, they would likely win,” the president said.

“You have been missing in action, except when it comes to the ‘press’. While you have stated that you don’t like Andrew Cuomo, you ought to start working alongside him for the good of all New Yorkers,” he suggested. (Continued Below)

“I’ve known you for many years, but I never knew how bad a Senator you are for the state of New York, until I became President,” the Commander in Chief expressed.

Kellyanne Conway On Wednesday’s Hearing: It Showed “How Desperate Democrats Are To Figure Out A Way To Get Trump”