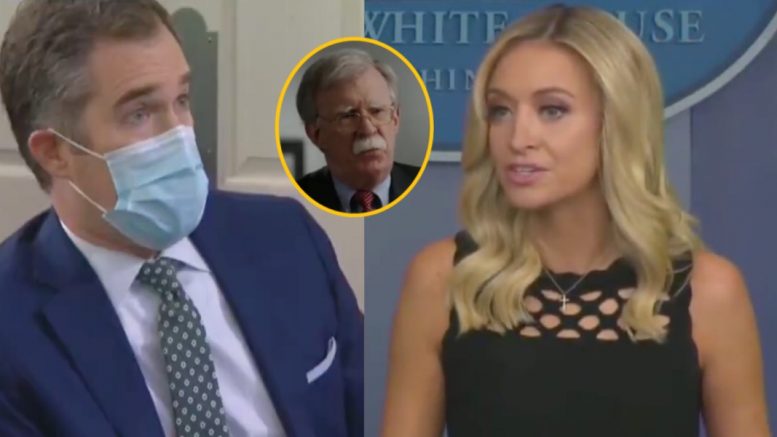 Friday during the White House press briefing, NBC News’ White House correspondent Peter Alexander questioned the press secretary over President Trump’s hiring process and the labels he has coined to former officials who have served in his administration.

“Why does the president keep hiring people who are dumb as rock, overrated, way over their heads, wacko, and incompetent?” Peter Alexander asked Kayleigh McEnany.

Alexander’s question comes after the president tweeted Wednesday: “Wacko John Bolton’s ‘exceedingly tedious’ (New York Times) book is made up of lies & fake stories. Said all good about me, in print, until the day I fired him. A disgruntled boring fool who only wanted to go to war. Never had a clue, was ostracized & happily dumped. What a dope!”

The White House press secretary explained that President Trump “makes hiring decisions based on the fact that he likes countervailing viewpoints.”

“I spoke to him this morning over the hiring of John Bolton in particular. He said I like to counterbalance my own opinion with individuals that often times have the very opposite opinion of my own. He likes having the model of having a team of rivals, like what we’ve saw in President Lincoln’s administration. I’ve been a part of that; I often see rigorous debate. The president uses his gut and makes the best decision on how to move forward. So that’s what goes into his hiring practices, and I think the team of rivals with President Lincoln worked quite well,” she said.

Alexander told McEnany there is “value in hiring a team of rivals that’s worked well in the past”, but wondered: “Why but hire rivals that are dumb as rock, overrated, way over their heads, wacko, and incompetent? How does that help the president and the country?” Continued Below

“Sometimes those rivals prove those labels to be true,” McEnany told the NBC News correspondent. “That’s particularly true in the case of John Bolton.”

She noted that the former national security adviser “repeated praised the president then turned”.

“He’s been widely criticized by the New York Times for his book. I think John Bolton has proven himself to have those labels as true,” McEnany added. Video Below

In an interview with Fox News host Sean Hannity Wednesday night, President Trump argued that John Bolton “broke the law” by disclosing highly classified information about the President and his negotiations with China and Russia in his soon to be released memoir “The Room Where It Happened.”

“He broke the law,” the president said. “He was a washed-up guy, I gave him a chance. He couldn’t get Senate confirmed, so I gave him a non-Senate confirmed position, where I could just put him there, see how he worked. I wasn’t very enamored.” Continued Below

The Commander in Chief added that he and John Bolton disagreed on many issues, including whether to send U.S. troops to Iraq, which, he said, was a move that his former national security adviser strongly supported. President Trump, however, didn’t want that to happen even before he was elected president, he said.

“But, he broke the law. Very simple. I mean, as much as it’s gonna be broken. This is highly classified, that’s the highest stage. It’s highly classified information and he did not have approval. That’s come out now very loud and very strong,” President Trump explained.