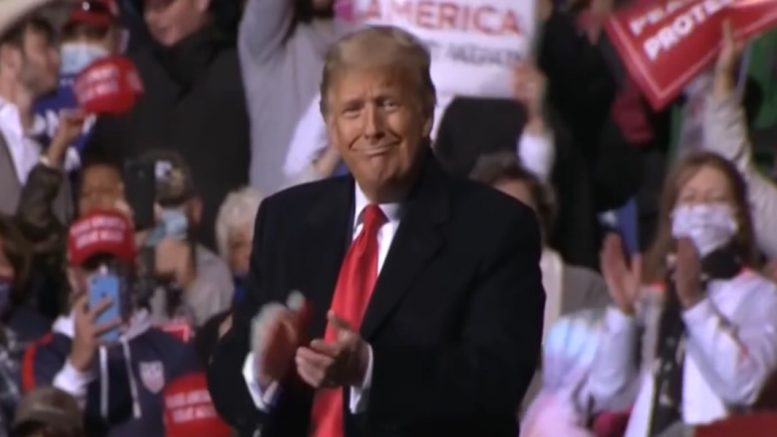 45th President Donald J. Trump declared on Friday in email statement there is “BIG news out of Pennsylvania!”

His statement came after a statewide court said Pennsylvania’s expansive two-year-old mail-in voting law is unconstitutional, agreeing with challenges by Republicans. According to a Commonwealth Court filing released Friday, the court ruled that Act 77, allowing residents to vote by mail in Pennsylvania, violates Article VII, Section 1 of the Pennsylvania constitution, Amy Lutz with FOX43 reported.

“The practice of no-excuse mail-in ballots, put in place by Democrats right before the stolen 2020 Election, has been ruled UNCONSTITUTIONAL by the Pennsylvania Commonwealth Court,” President Trump said in a statement from his “Save America PAC.

“We all know the answer—it wasn’t!” said the 45th President.

“All American Patriots are thanking the Commonwealth Court of Pennsylvania for having the courage to do the right thing!” Trump expressed, concluding his statement. Continued Below

In the ruling, Commonwealth Court President Judge Mary Hannah Leavitt wrote, “If presented to the people, a constitutional amendment to end Article VII, Section 1 requirement of in-person voting is likely to be adopted. But a constitutional amendment must be presented to the people and adopted into our fundamental law before legislation allowing no-excuse mail-in voting can be ‘placed upon our statute books.’”

Friday’s decision by a five-judge Commonwealth Court panel could be put on hold immediately by an appeal from Gov. Tom Wolf’s administration to the state Supreme Court. The decision throws the state’s voting laws into doubt in a big election year. The three Republican judges agreed with Republican challengers. The two Democrats on the panel dissented. Continued Below

Pennsylvania’s attorney general, Josh Shapiro, said in a statement the opinion will be immediately appealed and will not have any immediate impact on Pennsylvania’s upcoming elections, KDKA CBS 2 Pittsburgh reported.

2.6 million mail-in ballots were counted in Pennsylvania in the 2020 general election, according to the Pennsylvania Department of State. Continued Below

“BIG news out of Pennsylvania!

The practice of no-excuse mail-in ballots, put in place by Democrats right before the stolen 2020 Election, has been ruled UNCONSTITUTIONAL by the Pennsylvania Commonwealth Court.

Here is the key question… pic.twitter.com/KejRFlCab8

In May of 2020, House Speaker Nancy Pelosi (D-CA) claimed during an interview on MSNBC that “vote-by-mail” has become a “health issue” for the safety of the November 2020 general election.

“First of all, we’re now calling it ‘vote-at-home’, because that’s really what it is all about — enabling people to vote at home,” Pelosi said.

“… This is a health issue, in addition to a convenience issue for the American people, in terms of shelter in place. … So this is one of our Hills of Rome that we will fight and win, and it is about the good health of the American people … but not exposing themselves to injury,” she had alleged.

Jon Karl: “Why Did You Lie To The America People & Why Should We Trust What You Have To Say Now?”