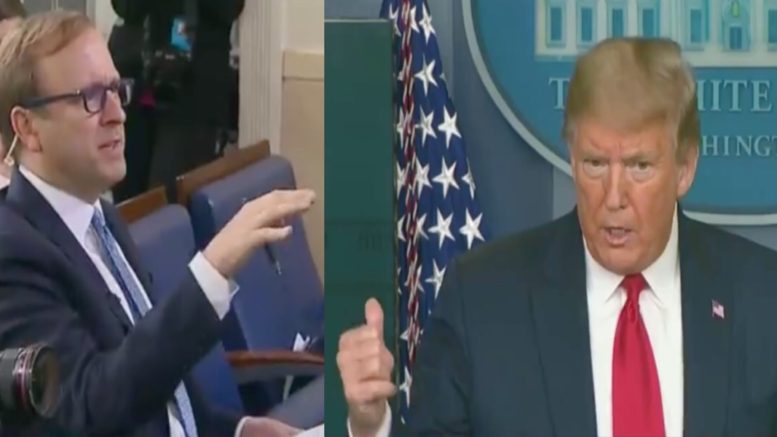 This comes as some news organizations, such as the New York Times, have claimed that the president did not act fast enough to COVID-19.

“We have a few clips that we’re just gonna put up. … I think you’ll find them interesting,” the president said before the video montage played for reporters in the briefing room.

The president rolled the tape and it showed a few different outlets of people who had downplayed the coronavirus in the early stages.

Then, the video showed the president and the Task Force taking steps to respond to COVID-19.

As the video continued, clips of Democratic governors, Andrew Cuomo (NY) and Gavin Newsom (CA) were shown, praising the president and his administration for taking immediate action and being responsive during the pandemic. Continued Below

“We could give you hundreds of clips like that,” the president said after the montage was played for reporters. “We have them. We didn’t want this to go on [for] too long. I just want to say, you know, it’s very sad when people write false stories. In that case, … from the New York Times …”

ABC’s Jonathan Karl asked the president afterward: “I have never seen a video like that played in this room. It looks a bit like a campaign ad. Who produced that video for you?”

“That was done by a group in the office. I can give you– I’ll bet you I have over a hundred more clips, even better than them. They were just pieced together over the last two hours. Oh, we have far better than that. That’s nothing compared to some,” the president expressed. Video Below

“Why did you feel the need to do that?” Karl then asked the president.

Trump responded: “Because we’re getting fake news, and I like to have it corrected. [Governors] are saying what a great job we’re doing.”

President Trump plays a montage of the media downplaying the Coronavirus:

Jonathan Karls wonders why the president played the video:

President Trump gives a Timeline of his Coronavirus Response: pic.twitter.com/ocOVcg4tmH

Meanwhile CNN and MSNBC “cut out” the briefing:

"We are cutting into what was not a White House coronavirus briefing," @AriMelber says on MSNBC.

Then, CNN claimed the president is “angry” and turned the briefing into “propaganda” and trying to “rewrite history” on coronavirus response: