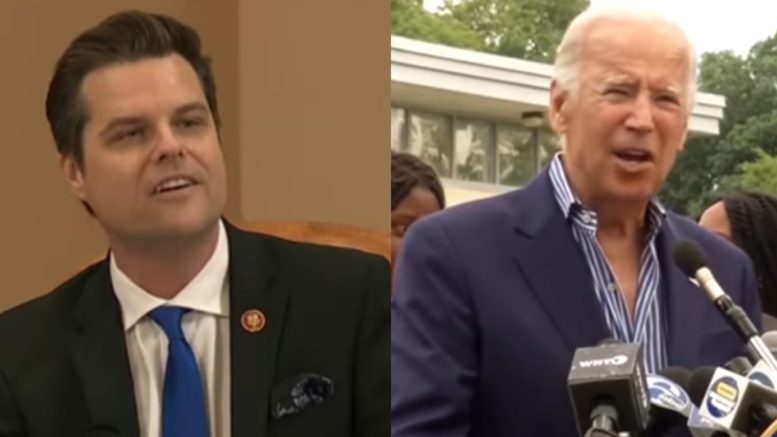 According to Politico, Biden will address in his briefings “how he would handle the crisis” and respond to “lies and failures of President Trump.”

On Friday, the former VP reportedly “gave a preview of what’s to come” while speaking to reporters in a conference call from his home in Delaware, where he has been social distancing himself in compliance with CDC recommendations.

As quoted by Politico, Biden said in his conference call: “President Trump stop saying false things, will ya?”

“People are worried they are really frightened, when these things don’t come through,” he continued. “He just exacerbates their concern. Stop saying false things you think make you sound like a hero and start putting the full weight of the federal government behind finding fast, safe and effective treatments.”

In reaction to Biden’s decision to hold shadow briefings, Rep. Gaetz said he doesn’t “trust Biden to know what state he is in” and suggested that Biden is better off staying safe and listening to “his President.” See Below

Gaetz tweeted, “Wut? Is Biden trying to thrust the confusion torturing his own mind upon the rest of us during crisis?

“I trust @realDonaldTrump, @VP & the health pros,” he added. “I don’t trust Biden to know what state he is in. Biden should shelter in place, stay safe, and listen to his President.” See Below

Is Biden trying to thrust the confusion torturing his own mind upon the rest of us during crisis?

I don’t trust Biden to know what state he is in.

Biden should shelter in place, stay safe, and listen to his President. https://t.co/Hdr8Yg3sTi

Biden has, in fact, forgotten which state or city he was in while speaking on the campaign trail.

We leave you with a couple of those clips, topped off with President Trump’s commentary.

Biden talks w/press in Keene, NH: "I love this place. Look, what’s not to like about Vermont in terms of the beauty of it? And what a neat town…everybody has been really friendly. I like Keene a lot." pic.twitter.com/0hKsgiDfwM

This is a pattern with Joe Biden.

While in IOWA, Biden says he is in “OHIO.” pic.twitter.com/xqZoQwWwtY