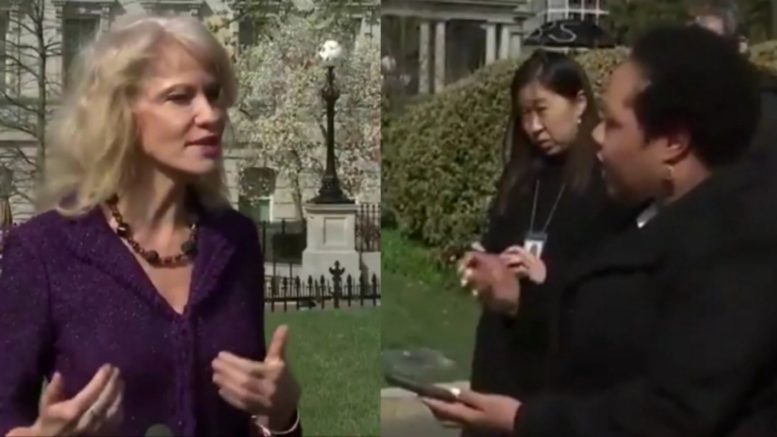 On Tuesday, CBS White House Correspondent, Weijia Jiang, claimed on Twitter without giving a name: “This morning a White House official referred to #Coronavirus as the ‘Kung-Flu’ to my face. Makes me wonder what they’re calling it behind my back.”

On Wednesday, counselor to the president, Kellyanne Conway, responded to the claim that a White House Official called the coronavirus “Kung Flu”, and told reporters, “Tell us who it was.”

“You can’t just say that and not name them,” Conway told reporters when asked about the alleged White House official using the term “Kung Flu”.

PBS White House correspondent Yamiche Alcindor asked Conway, “For staffers watching right now, what is your message? Is it wrong that it happened?”

The counselor to the president told Alcindor: “Excuse me. That’s been alleged. I’m not dealing in hypotheticals. Of course, it’s wrong, but you can’t just make an accusation and not tell us who it is. Who is it? Come and tell us.” (Continued Below)

Weijia Jiang who made the claim against the White House staffer refused to name who the staffer was when Conway kept pressing for an answer.

Jiang told Conway: “I think you understand how these conversations go,” to which Conway responded: “No, I don’t know how these conversations go, and that’s highly offensive. You should tell us all who it is. I’d like to know who it is. I’m not gonna engage in hypotheticals. I’m married to an Asian– my kids are partly. Yes, I’m married to an Asian American. My kids are 25% Filipino.”

Jiang could be heard saying, “Well, I’m sorry”, to which Conway replied, “You’re all so obsessed, I thought you knew.” (Continued Below)

Yamiche Alcindor kept trying to interrupt, but Conway asked the PBS reporter: “Who is it Yamiche? I’m trying to be here to help you help America understand how to slow the spread, and you’re shouting at me in a way about something that somebody allegedly said to somebody else. And I’m asking who was it? Why don’t we go to the source?”

“I certainly didn’t say it. I don’t believe it. So, why don’t we go to the source and tell them it’s very hurtful and unhelpful for what we’re trying to do? And pardon me if I’ve been mistaken that you all are trying to inform America as to what is going on. We’re really pleased that your networks and your cable stations and your radio affiliates are all helping us to inform America by donating significant space on networks to these public service announcements that we’ve been reporting with health officials,” Conway said.

Weijia Jiang disregarded Conway’s advice to reporters and asked: “But can you at least say there’s a policy from the White House to say to its staff to not call it that?” (Video Below)

This morning a White House official referred to #Coronavirus as the “Kung-Flu” to my face. Makes me wonder what they’re calling it behind my back.

Kellyanne Conway to reporters on alleged White House staffers calling Coronavirus "Kung Flu virus": "You should tell it all who it is. I'd like to know who it is." pic.twitter.com/ZCJu5UtfaE