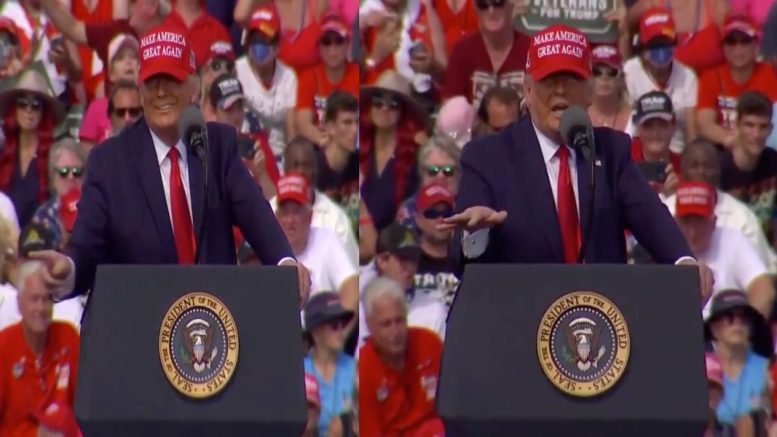 During a Thursday rally in Tampa, Florida, the crowd erupted in chants, saying, “Creepy Joe! Creepy Joe!”, after the Commander in Chief at one point mocked Democratic nominee Joe Biden as “a touchy-feely guy”.

The president said in his remarks that Biden is “not a nice guy” and that “if he was a nice guy, he couldn’t say these things”, then suggested, “Now he doesn’t remember if he’s a nice guy”.

President Trump said that Joe Biden “was never considered smart”, referring to the former vice president, who graduated from law school in 1968 and was ranked 76th in a class of 85.

“He was a touchy-feely guy. You know those guys– touchy-feely, but not a nice guy, not a smart guy,” Trump told the crowd in Tampa, Florida, mocking Biden.

“Our incredible first lady is sitting here right now and she’s saying to herself, ‘I wonder if all rallies are like this?'” President Trump joked. “Most of them are a little bit different, but that’s okay. You know why, honey? We’re in Florida. This is like home, this is home, right? This is home. We say it like it is. We say it like it is.” Video Below

Last year, former counselor to the president, Kellyanne Conway said in an interview on Fox News: “If anybody just types in ‘Creepy Uncle Joe Videos,’ you come up with a treasure trove. Far more evidentiary information and videos than we saw when Brett Kavanaugh’s nomination was trying to be derailed and him, as an individual and family, being destroyed by folks who had no evidence of what allegedly happened 34 years earlier.”

Conway added, “I think Joe Biden has a big problem here because he calls it affectionate hand shakes. His party calls it completely inappropriate. I think he’s had the worst non-rollout for any would-be 2020 candidate on the Democratic side.”

During the summer, during a Turning Point Action convention in Phoenix, Arizona, Donald Trump Jr. slammed Joe Biden for “sniffing children”, asking the audience, “Would any of you leave your young child with Joe Biden alone?”

Don Jr.’s question to the audience appeared to be over Joe Biden’s inappropriate behavior towards women and children, which can be seen online in several pictures and videos, and which shows the former vice president standing behind women and girls of all ages, massaging their shoulders, rubbing their backs, nuzzling their hair, whispering into their ears, and sometimes offering clearly unwanted kisses.

.@donaldjtrumpjr slams Joe Biden at 'Students for Trump' event: "Would any of you leave your young child with Joe Biden alone?" pic.twitter.com/WRaIIycBeb

Earlier in the year, uncovered video appeared to support former Joe Biden staffer Tara Reade’s accusation that the former Vice President sexually assaulted her in 1993 within the Senate corridor. Meanwhile, forces of the left have paid rather little attention to Reade’s claims.