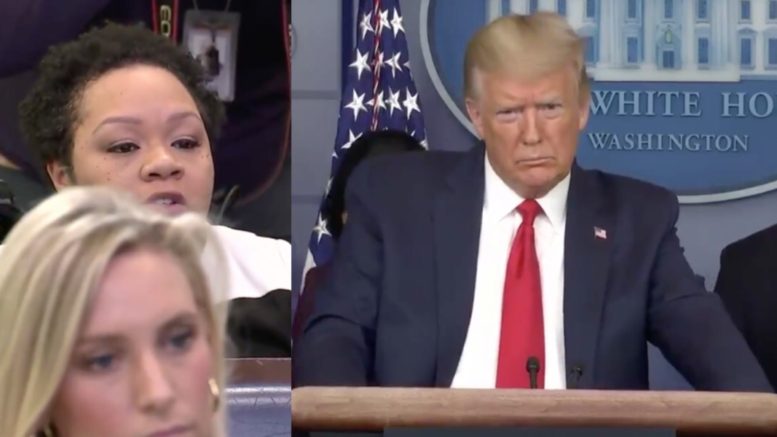 Members of the coronavirus task force held a press briefing Wednesday to give an update on the COVID-19 pandemic.

During the briefing, President Donald Trump took questions from reporters and was asked however by PBS White House correspondent Yamiche Alcindor about the term “Kung-Flu”, that was allegedly said by a White House official.

On Tuesday, CBS White House Correspondent, Weijia Jiang had claimed on Twitter without giving a name: “This morning a White House official referred to #Coronavirus as the ‘Kung-Flu’ to my face. Makes me wonder what they’re calling it behind my back.”

“There’s some, at least one White House official who used the term ‘Kung Flu’, referring to the fact that this virus started in China. Is that acceptable? Is it wrong?” Yamiche Alcindor asked the president Wednesday.

The PBS reporter told the president: “I’m not sure the person’s name. But would you condemn the fact–Kung flu? A person at the White House used the term Kung flu. My question is do you think that’s wrong? And do you think using the term Chinese virus puts Asians Americans at risk that people might target them?” (Continued Below)

The Commander in Chief replied: “No, not at all. I think that they would probably agree with it 100%. It comes from China. There’s nothing not to agree on.”

According to the Centers for Control and Disease Prevention (CDC), COVID-19 is a respiratory disease caused by a novel (new) coronavirus that was first detected in China, and which has now been detected in more than 150 locations internationally, including in the United States. The virus has been named “SARS-CoV-2” and the disease it causes has been named “coronavirus disease 2019” (abbreviated “COVID-19”). (Video Below)

This morning a White House official referred to #Coronavirus as the “Kung-Flu” to my face. Makes me wonder what they’re calling it behind my back.