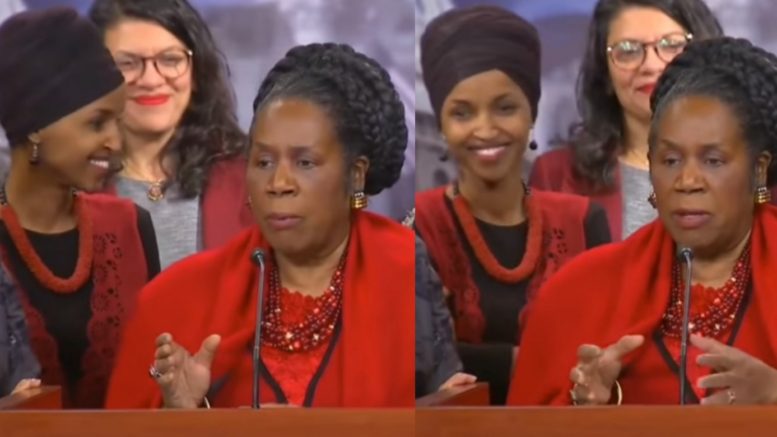 After being briefed by Trump Administration officials about the airstrike that killed Iranian general Qassem Soleimani, House Democrats held a press conference, where Congresswoman Ilhan Omar (D-MN) claimed she felt “ill” and “strickened with PTSD” because of “conversations about war”.

However, moments after making such remarks, Omar is seen in the background appearing to laugh and joke around with her colleagues as the topic of war was being discussed.

Rep. Sheila Jackson Lee (D-TX) was discussing American casualties and injuries from the Iraq War, when national TV cameras caught not so much of an “ill” demeanor from Omar…in fact, she appeared to be enjoying herself while laughing and talking with “Squad” members Rep. Rashida Tlaib (D-MI) and Rep. Ayanna Pressley (D-MA).

“I’m very glad to say that I was part of the 132 and also the vote for Barbara Lee’s amendment, but I think that the point of that is that that is the same war that we’re dealing with today,” Rep. Lee said. “We never solved any problems with AUMF, we left four thousand plus, maybe even forty-four hundred dead, and over sixty thousand who came back injured in some form and the war never ended.”

“I recall the language in AUMF, it deals with hostilities in Iraq,” Lee continued. “It doesn’t deal with an incident or a dislike or someone in a car coming in from the airport. That is the danger of not acting and I do think with our leadership, meaning the leadership CPC, that will come together around specific answers.” Video Below

Ilhan Omar laughs and jokes around as her colleague discusses U.S. casualties in Iraq:

In ending, here is video of Rep. Omar’s earlier remarks where she claims to feel “ill” and stricken with “PTSD” over “conversations about war”:

What exactly does Ilhan Omar "feel ill" about?

That we took out a terrorist who killed at least 603 Americans and was plotting more?

That deterrence works and we suffered ZERO U.S. casualties?

That the days of tolerating Iran's terror are over?
pic.twitter.com/tiHsrNoU9Z

Jason Miller On Whether Trump Will Run In 2024: “The Fire Is There…If The Election Was Next Week, He’d Be Ready To Go”