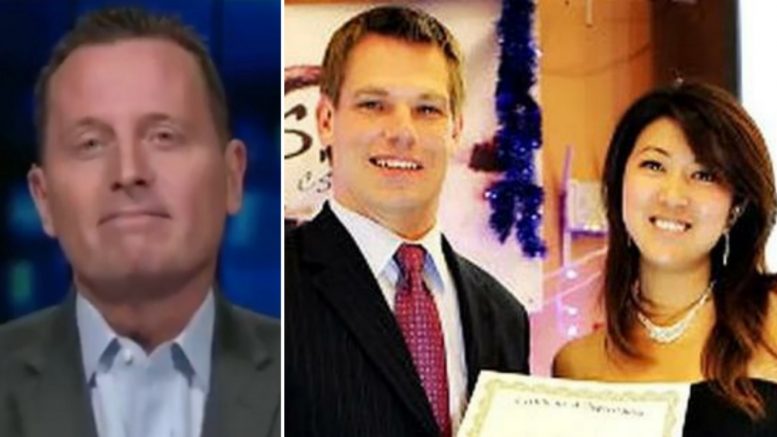 Former Acting DNI Ric Grenell revealed that “there’s many, many more” politicians like Congressman Eric Swalwell (D-CA) who were strategically targeted by the Chinese government as a way to gain influence in American politics. And what has been uncovered over the last few days is only “the tip of the iceberg.”

While appearing on Wednesday’s airing of Hannity, Grenell weighed in on a report that was released by Axios on Monday that linked Rep. Swalwell to a Chinese national named Fang Fang — aka Christina Fang — an alleged operative for China’s Ministry of State Security.

According to the report, Fang first began interacting with Swalwell in the early stages of his political career in 2012, and eventually assisted in campaign contribution efforts for his re-election bid in 2014. At one point, Fang even helped place an intern in the California congressman’s office.

In 2015, Swalwell cut off contact with Fang after U.S. intelligence officials provided a “defensive briefing” to him in regards to Fang’s activities that they had been monitoring for some time, according to the report.

While Swalwell and his office refuse to comment on the extent of his relationship with the alleged Chinese spy, it’s been reported that Fang had “romantic or sexual relationships” with at least two elected officials, and did so to help the Chinese government gain political influence.

“Eric Swalwell did exactly what the Chinese wanted. We need to figure out if there are others, and I can tell you without giving away too much intelligence, this is the tip of the iceberg when it comes to the leverage that China is putting on our politicians. There’s many, many more,” Grenell proclaimed.

Related Article: Swalwell Claims Trump Is Behind The Chinese Spy Report, Grenell Reacts: “He Who Smelt It, Dealt It”

Asked if Biden is among the politicians he is referring to, Grenell replied, “There’s a variety of mayors, governors, senior people.”

“There’s a whole bunch,” he added. “And more should be coming out. They’ve all received defensive briefings and there’s a lot more to it. This is the tip of the iceberg.” Video Below