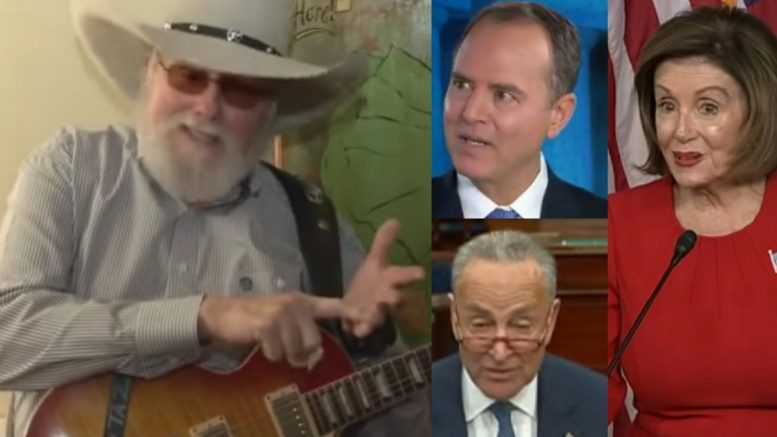 In wake of the airstrike that killed Iranian military general Qassem Soleimani, Republicans have been unified in applauding President Trump for ridding the world of one of its most dangerous terrorists.

Congressman Schiff publicly questioned the strategy behind Soleimani’s death and if it’s really just part of some “broader coherent plan” by the Trump Administration. He also slammed the Administration for not briefing Congress over their strategy.

Speaker Pelosi insinuated that President Trump may have engaged in a “disproportionate” action by eliminating Soleimani and demanded that the Administration consults with Congress before anymore actions are taken on Iran.

Senator Schumer has accused President Trump of being “hell bent” on starting a war and vowed to “fight him tooth and nail on this.” He has since called on Congress to vote on a resolution limiting Trump on Iran.

Meanwhile, singer and songwriter Charlie Daniels has taken note of criticism coming from the Democrat party’s most powerful leaders, pulling into question whose side they are really on. See Below

As Iranians finished off the “million mourner” funeral procession attributed to Soleimani, Daniels wondered why Pelosi, Schiff & Schumer, who’ve all been speaking so harshly against President Trump, weren’t present at the spectacle.

Moments later in another tweet, Daniels specifically targeted Pelosi, telling her she may have forgotten whose side she is on.

We leave you with that statement made by Daniels directed at Pelosi:

Ms pelosi there is no wrong time or bad time for ridding the world of a monster like Soleimani
Tell it to the parents, spouses and children of the American warriors his IEDs killed and maimed in Iraq
Whose side are you on
What country do you serve
I think you’ve forgotten