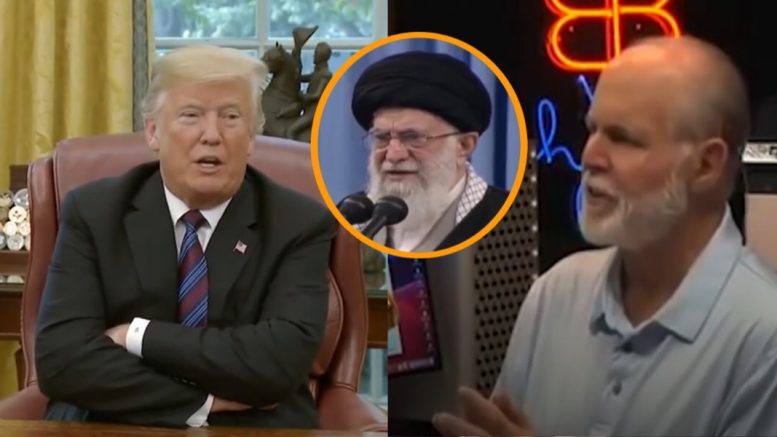 “They know if they do anything against us, they will pay 1,000 fold,” President Trump said, adding, “They’ve been put on notice: If you f**k around with us, if you do something bad to us, we are going to do things to you that have never been done before.”

“Bo Snerdley,” a legendary producer of Limbaugh’s show, confirmed the moment on Twitter as part of “radio history.”

More radio history. The President said "If they F*** around with us," – that was classic — i think Mike beeped it on the radio feed

The audio was censored before it went to radio stations across the country, but it was caught on the live “Dittocam” of Limbaugh for his subscribers, Breitbart noted.

Trump boasted that during his presidency, Iran had become a “very poor nation” unlike during former President Barack Obama’s presidency. “They’re no longer rich, and they’re not giving out hundreds of millions of dollars to Hamas and all these other groups that caused all the problems,” he said, as reported by Breitbart.

NCSC Director William Evanina said in a press release, in August, regarding Iran, “We assess that Iran seeks to undermine U.S. democratic institutions, President Trump, and to divide the country in advance of the 2020 elections.

Iran’s efforts along these lines probably will focus on on-line influence, such as spreading disinformation on social media and recirculating anti-U.S. content. Tehran’s motivation to conduct such activities is, in part, driven by a perception that President Trump’s reelection would result in a continuation of U.S. pressure on Iran in an effort to foment regime change, per the press release. Continued Below

Some users on Twitter noted of President Trump’s remarks:

Is it just me or does Trump dropping an F-Bomb when talking about Iran just bring a smile to my face?

I allow my President to launch the F-bomb anytime when referring to Iran. Has Obama done that, it would have demonstrated he has some balls and recognizes who are adversaries are. #FBomb