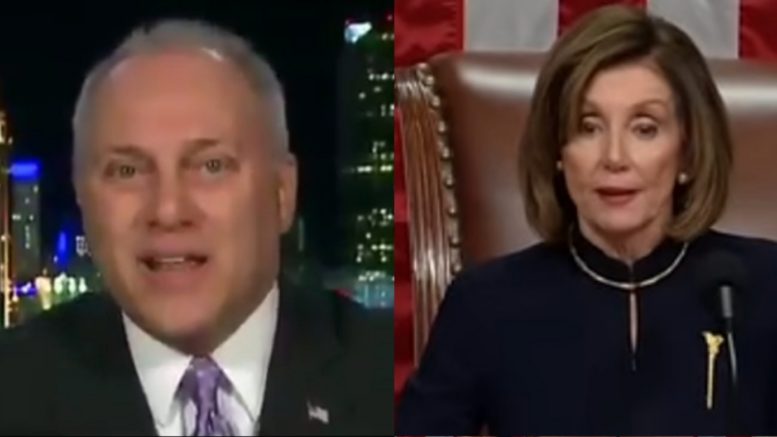 Following the vote, Pelosi suggested she will not pass articles to the Senate or appoint impeachment managers until she can analyze the level of “fairness” in rules that will apply to the trial.

While appearing for an interview with Dan Bongino, Scalise claimed Pelosi is involved in her very own “quid pro quo,” which is ironically the same thing Democrats tried to accuse President Trump of committing as part of his infamous phone conversation with Ukrainian President Zelensky.

Scalise made the connection in response to Bongino who said the impeachment process seems kind of “backwards,” especially since Senator Chuck Schumer is trying to call witnesses after the impeachment of President Trump. Bongino asked, “Am I reading this right? He needs more witnesses but they already took a vote saying…they had enough evidence to impeach?”

“Yea we said this all along,” Scalise replied. “There really was no crime. The President committed no crime. It was an impeachment in search of a crime, and they never found one.”

“All of their witnesses, their star witnesses all said that there was no crime, there was no bribery,” he added. “And now you’ve got Pelosi really carrying out her own quid pro quo.” Video Below

Related Article: Sebastian Gorka: “Democrats Have Launched A Boomerang & It’s Going To Take Their Own Heads Off”

“She’s trying to say, ‘I won’t give you the papers unless you do this. Isn’t that what they were accusing President Trump of?” Scalise questioned.

“Look, Joe Biden did the quid pro quo that he bragged about. You know, ‘Hey, I’ll take the billion dollars of tax payers’ money if you don’t fire the prosecutor.’ Pelosi’s doing a quid pro quo. President Trump is the only one who didn’t do one and they impeached him for it. This is bizarre. And look, there is no case,” Scalise declared. Video Below