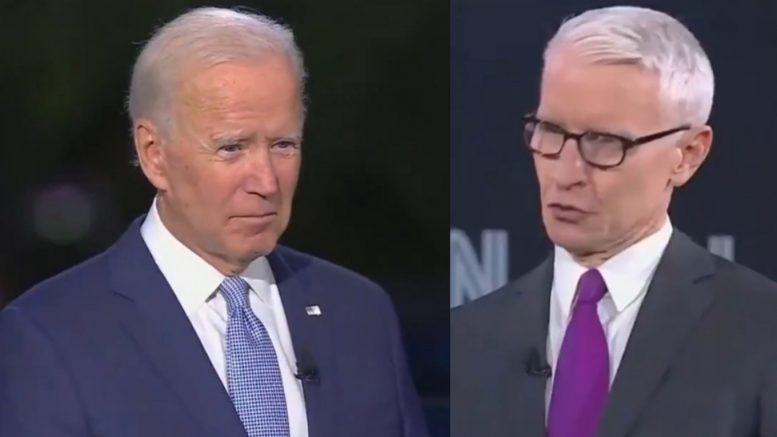 The incident was caught on camera right after Cooper signaled for a commercial break.

As the camera panned out, Biden and Cooper are seen without their masks on, walking to within inches of each other and trading remarks well within the CDC’s recommended six feet. Trump War Room tweeted a video of the incident:

WATCH: Joe Biden and Anderson Cooper stop social distancing during commercial break and whisper to each other without masks. #CNNTownHall pic.twitter.com/VGptRj6WPk

CNN wrote an article about Trump’s Thursday rally in Nevada that was titled, “No social distancing, few masks as crowd waits for Trump rally in Nevada…”

Fast forward to Thursday evening, and CNN’s very own Anderson Cooper and former Vice President Biden will likely hear crickets from the same media sources and individuals who were highly critical of President Trump and his supporters just a week ago. Video Below

Related Article: The Hill Gets Fact-Checked By Their Own Photo After Claiming Trump Supporters Didn’t Wear Masks At NC Rally

Aside from his social distancing flub, Biden appeared to lose his train of thought while answering a question about the Green New Deal.

When answering a question on the Green New Deal, Joe Biden forgets his train of thought and answers on ventilating schoolshttps://t.co/xoa7fKzr7z pic.twitter.com/BuWgGNQSZv

Don Lemon To Cuomo: “Jesus Christ, Admittedly Was Not Perfect When He Was Here On This Earth”