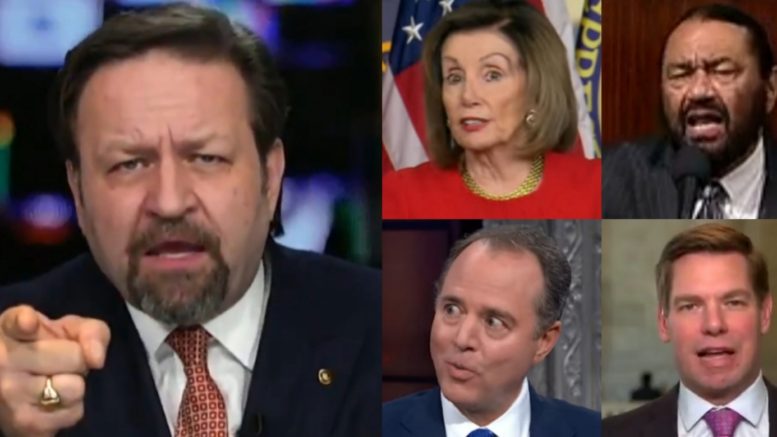 On Monday, Gregg Jarrett and Sebastian Gorka took turns slamming Adam Schiff over questionable tactics he has used and controversial statements he has made while being Chairman of the House Intelligence Committee.

In recent weeks, Schiff took heat for using his power to acquire and make public the phone records of ranking House Intel member Devin Nunes along with members of the media and President Trump’s legal team.

Related Article: Rep. Reschenthaler: “I Would Prosecute Schiff For Abuse Of Power…& The Democrats For Obstruction”

Schiff also recently said he does not have any sympathy for Carter Page, and that he has no regrets for suggesting in a 2018 memo that the FBI did not abuse the foreign surveillance process, despite the reported findings of Inspector General Michael Horowitz’s investigation.

When asked about what he thought about Schiff’s reported tactics and remarks, Gorka proclaimed, “The truth is very simple. Donald Trump has committed one crime and one crime alone — he defeated Hillary Clinton.”

“And Adam Schiff will do whatever he can to punish Donald Trump, but he chose the wrong President,” he continued. “And it is Adam Schiff who is in legal jeopardy for all his illegal activities and contravention of the U.S. Constitution, and that’s why [Democrats] even lost the Independents.”

“Think about it. In October, Independents were slightly in favor of impeachment. In December, they’re against it. What happened between October and December? Oh yes, the impeachment hearings,” Gorka suggested.

“The Democrats have launched a boomerang and it’s going to take their own heads off,” he concluded. Video Below