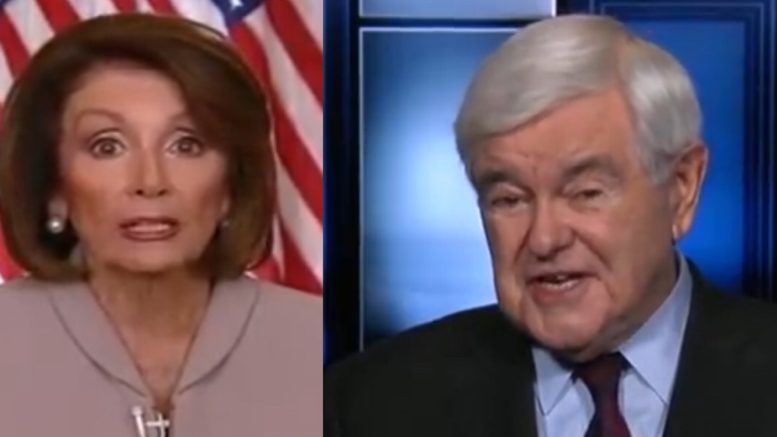 Newt Gingrich spoke with “Fox & Friends” Monday where he weighed in on House Speaker Nancy  Pelosi (D-CA) withholding articles of impeachment from the Senate.

Pelosi has signaled that the House is waiting for the Senate to set out how President Trump’s trial will be conducted before they determine the next steps, such as designating impeachment managers.

Asked what exactly is Speaker Pelosi doing, Newt Gingrich answered, “I think that they think they don’t have enough evidence to have any chance at all in the Senate and they’re buying time to see if they can create more evidence. That would be my guess.” [Emphasis added].

“But the whole thing is pretty stupid,” he continued. “First of all, they’re admitting that the case they have is so weak they don’t want to send it over to the Senate. The more they behave politically, the more they devalue the entire impeachment process.”

“This is politics, which furthers allows the president to keep gaining strength, which he has been doing now for 6 weeks,” Gingrich said. “[Democrats] talk impeachment, [President Trump] talks jobs. And day by day, he gaining ground, and they’re losing ground.”

Senator Lindsey Graham said Sunday on Fox News: “And to this impeachment debacle, to my Democratic colleagues, impeachment is a dead cat. Stop playing with it. Bury it. It’s going nowhere. Quit violating the Constitution. Give the president his day in court and let’s get this behind us so we can talk about things people really care about in this country.” [Emphasis added]. (Continued Below)

Gingrich said of Senator Graham’s “dead cat” analogy: “I think she finds herself in a position where essentially she has a live cat that she can’t get rid of, that she really didn’t want in the first place. And now, she literally has no good way out of this because when they do lose, their base is gonna be very angry.”

When asked why Pelosi moved forward with impeachment if she didn’t have a case from the beginning, Gringrich responded, “Because the left is in an alternative universe. If you go into a left-wing activist meeting, they hate Trump, they know Trump has done something terrible, they know he should be impeached.” (Video Below)

“Remember there were 99 Democrats who came out for impeachment before they ever heard of the Ukranian phone call. So this whole idea that there was some phone call and they made us do it… no. Almost 100 Democrats were for impeachment on general principle. The first article about impeachment ironically, is April 17, 2016. That’s months before the election, months before the inaugural, and they’re already talking about ‘we gotta impeach this guy’ who hasn’t even won yet,” Gingrich explained.

“Nancy’s faced with a very hardcore left that is in a total rage and is fairly psychotic and they’re saying to her, ‘If you don’t carry this out, we’re gonna destroy your Speakership,'” he added.

‘Get Ready’: Trump Announces He Will ‘Very, Very, Very Probably Do It Again’