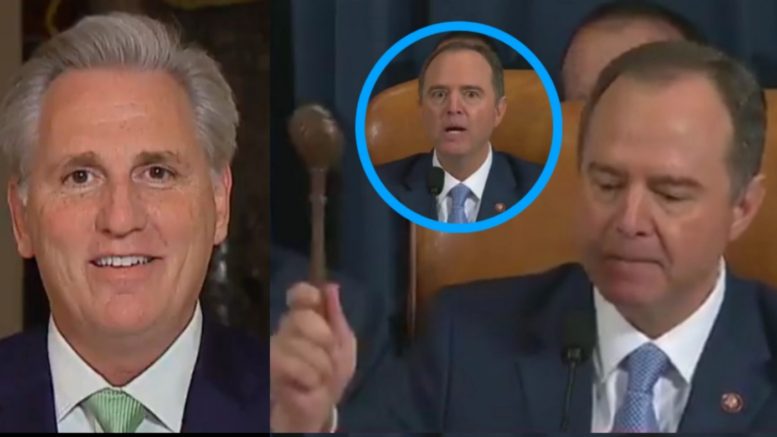 Schiff got emotional in his closing statement, as he tried persuading the American people one last time that President Trump committed a wrongful act in his phone call with Ukrainian President Zelensky.

“In my view there is nothing more dangerous than an unethical President who thinks they are above the law. And I would just say to people here at home and around the world, in the words of my great colleague, ‘We are better than that!'” Schiff said before slamming down his gavel.

In response to the status of the impeachment inquiry, Kevin McCarthy said, “We’ve gone through this for two weeks now. And, I think, the more that is shown — I think you’ve seen in the polls itself — that it’s dropping.”

“I wonder if Democrats will even have the votes to move impeachment,” he added. “You see that the facts are there.”

McCarthy thinks support for impeachment has dropped because the public has realized Ukraine is safer than they were under the Obama Administration, and facts show that President Trump released military aid to Ukraine without conditions. Video Below

“No matter how set this is by Adam Schiff,” McCarthy said. “I know he wants to impeach the President so bad that he will continue to lie.”

“If you watched how he closed this hearing, this is a man that knows the American public knows his lies and he knows he’s losing. There’s no way anyone would bang a gavel that hard if they didn’t know they were losing,” he declared. Video Below

Impeachment Nightmare. @GOPLeader Kevin McCarthy questions whether Dems will even have the votes to move forward with impeachment after 2 weeks of nonsensical hearings. #MAGA #AmericaFirst #Dobbs pic.twitter.com/oXVX7i5Iaz

In ending, here is video of Schiff making his closing statement:

.@RepAdamSchiff gets emotional in his closing statement pic.twitter.com/eN4etkcD4x