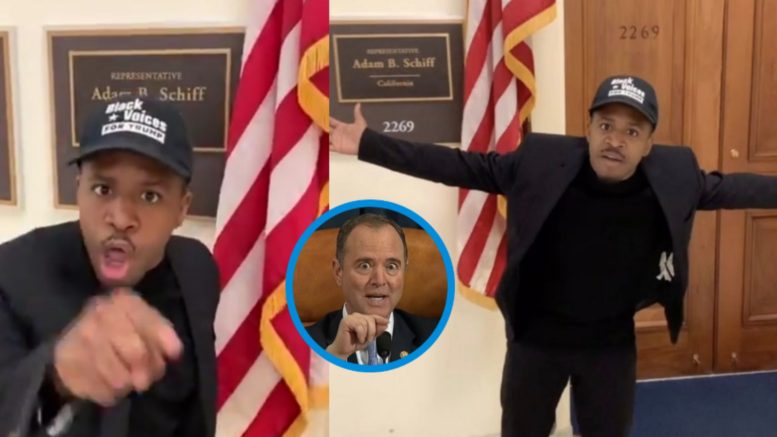 While House Intel Chairman Adam Schiff was leading the first public impeachment hearing on Wednesday, conservative comedian Terrence Williams was busy trying to figure out where the mysterious “whistleblower” is located — at Schiff’s Congressional office on Capitol Hill.

Terrence wanted some immediate answers, and he couldn’t have picked a better place to seek them than the office of Schiff, whose staffers allegedly had contact with the whistleblower.

“I am trying to figure out what is going on,” Terrence said in a video he made outside of Schiff’s office. “Why are they harrassing the President of the United States of America?”

“What they are doing to him is straight up criminal. It is criminal,” he continued. “This is not an impeachment hearing. No, no, no… this is a Witch Hunt hearing!”

Terrence went on to say that it is Hunter Biden and the whistleblower who should be testifying and Congress should be investigating.

Terrence then accused Schiff of lying when he denied that he doesn’t know the identity of the whistleblower at Wednesday’s hearing.

Sen. Hawley On His Plan To Object The Electoral College On Jan. 6: “Somebody Has To Stand Up Here”