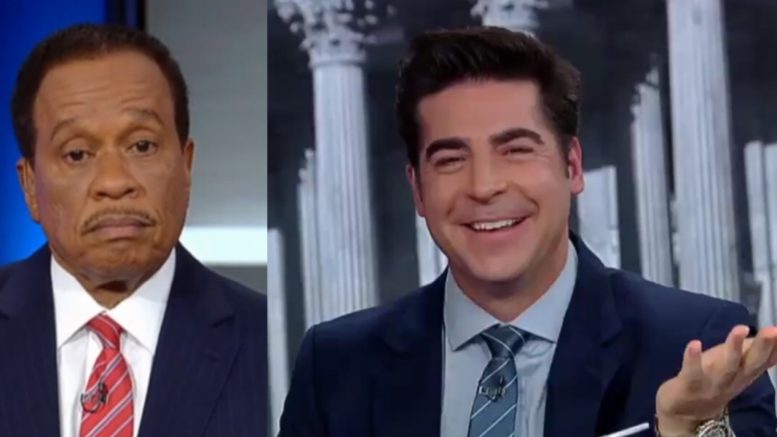 Thursday, on Fox News‘ “The Five”, co-host Jesse Watters schooled Juan Williams over why “the hoax is over”, pertaining to Democrats’ impeachment inquiry against President Donald Trump.

“The hox is over. It’s done. This whole thing is up in smoke!” Jesse Watters declared.

“I mean, you guys tried and failed,” he continued. “You didn’t have one witness to testify, [who] Trump directed the quid pro quo, involving military aid. Not one.”

“Let’s go home, just forget it all happened. Nancy Pelosi wasted everyone’s time,” Watters suggested. “What did she do in 2019, Juan? She got bullied by AOC, she shut down the government and then, she failed to impeach the President. We’re gonna look back at 2019 like… What?! You did nothing. No NAFTA, renegotiation, no drug prices, no infrastructure.”

“What happened today? Someone overheard a phone call? he asked, referring to David Holmes, who testified during Thursday’s hearing. “So what! He evesdropped? The President said, ‘I don’t give a blank about Ukraine.’ Well, neither does the country.” (Continued Below)

“The other one had a great accent,” Watters said, referring to Fiona Hill, who also testified Thursday. “Why was she even there?”

“I mean, this is the reason Trump is dual tracking diplomacy in Ukraine in the first place. Because of people like Fiona. Because Fiona doesn’t even know there was Ukraine collusion. She actually met Christopher Steele and saw the dossier, before the dossier went public,” he proclaimed.

“The whole thing comes down to this: Trump’s vision aligns with populism, skepticism of foreign aid, and doesn’t like these swampy Joe Biden type deals. So, we’re looking at this… this is the best you got? Try again, Watters suggested. (Video Below)

We leave you with “The Five” reacting to the media’s “impeachment hearing frenzy”:

(Related: McCarthy On Schiff’s Closing: “There’s No Way Anyone Would Bang A Gavel That Hard If They Didn’t Know They Were Losing”)