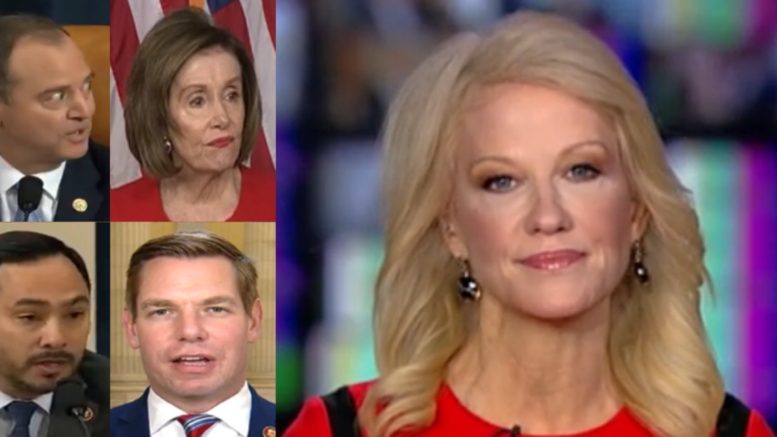 Counselor to the president, Kellyanne Conway, spoke with “Fox & Friends” Thursday to share the White House’s reaction after to the first public impeachment inquiry hearings took place on Wednesday with Ambassador William Taylor and Deputy Assistant Secretary of State for European and Eurasian Affairs, George Kent.

She also reacted to Deval Patrick, who entered the 2020 presidential race on Thursday.

Asked what we learned after the public hearing on Wednesday, Conway responded, “… Democrats really have no case against the president. If this was a real court of law and not Adam Schiff’s kangaroo court, objections would have been flying from any reasonable attorney to saying, ‘Hey, we just discovered that a staffer of mine overheard a conversation somebody else was having with the president from a restaurant.'”

“This is not admissable in a court of law and I think that’s why the president and people like Senator Graham, Chair of the Judiciary Committee, have said, ‘We want to know what the whistleblower said in the first place because we need to confront our accuser.’ If you were in a civil suit or in fact, a criminal suit, you would be able to confront your accuser, you’d be able to present evidence, challenge evidence, witnesses, and challenge witnesses,” Conway said.

“But here’s what we learned, let’s just review, this will take less than a minute: Ukraine got its aid,” she continued. “Ukraine got 400 million dollars worth of lethal aid from President Trump’s administration. Ukraine did not get that kind of aid from [former] President Obama’s administration, even though Russia invaded Crimea in 2014 on Obama’s watch. What we also know is that as of this morning, or overnight, another minister in Ukraine says, ‘There was no connection, there was no nexus made between investigations and the aid.’ We know previously that President Zelensky said in front of the whole world at the United Nations General Assembly, ‘he felt no pressure’. President Trump has said he put no pressure on them to do this.”

“And so, the people that are intimately involved in the transactions, for example, the two presidents’ of the two countries, and their top officials, their top diplomats, [said] this simply is not true. Ukraine has its aid, far more aid than it ever had under President Obama, and it’s far more aid for the United States of America as we sit here than it does from any other country,” Conway added. (Continued Below)

“This is relevant because I think that this entire inquiry is just a continuation of their Russian investigation that went nowhere in the Mueller report and the sequel, Mueller himself, who was stumbling and bumbling through his testimony. He was the original star witness of the summer that was supposed to ‘undo the president,'” Conway said.

“And I think when you see someone like Deval Patrick get in the presidential race today, no one nowhere is asking for one more candidate and asking for Duval Patrick to get in the race. I think it shows how desperate the Democrats are to figure out a way to get President Trump. They can’t get him at the ballot box, they’re trying to undo a democratically elected president from three years ago, and they’re trying to interfere in the next election. Yes, I said that. And I think America is smarter than that,” the Counselor to the president explained.

She noted that the 31 Democrats who won in 2018, the distracts President Trump and Vice President Pence carried in 2016, are “probably watching this most closely,” adding “Much more closely than the country is. You tune in, you’re either sound asleep or you can’t follow ‘he said, she said, he said, she said, he said’. It’s a bunch of gossip girls. It’s not a legitimate inquiry.” (Continued Below)

Asked if the White House wants to stop the impeachment inquiry, Kellyanne said, “One, and most prominently is to make sure that those Democrats, each of whom gets a vote, understand that they belong to a party where the leadership, that put the inquiry on the table, like Pelosi and Hoyer and Adam Schiff, certainly the Intel Chairman– they represent safe districts. They don’t represent districts that Donald Trump and Mike Pence won, and will win again next year.

Conway continued, “When these people go home, they have to face their own voters in their own districts, not the crazy leftwing nuts, who want us to be a socialist country. They have to face their own voters, and they need to say them, ‘Hey, what have you done for me lately? Oh, I impeached the president.’ Well, where’s the vote on USMCA? Where are the trade deals? Where is the drug pricing reductions? Where is the infrastructure plan? Where is what you promised me when you ran?”

“And you can roll the tape, you can see what they ran on. Go show me what anyone ran on in those 31 Trump-Pence districts, those Democrats, who ran on, ‘I’m gonna get there and impeach the president.’ You know who has said that? Foul-mouthed what’s her name. She told her 5-year-old son, ‘We’re gonna impeach the M-F’er.’ Really classy mom of the year, in fact,” she added referring to Rep. Rashida Talib (D-MI).

(Related: Swalwell Says Impeachment Is “Sinking In” For Most Americans & Repubs Are In “Deep Denial”)