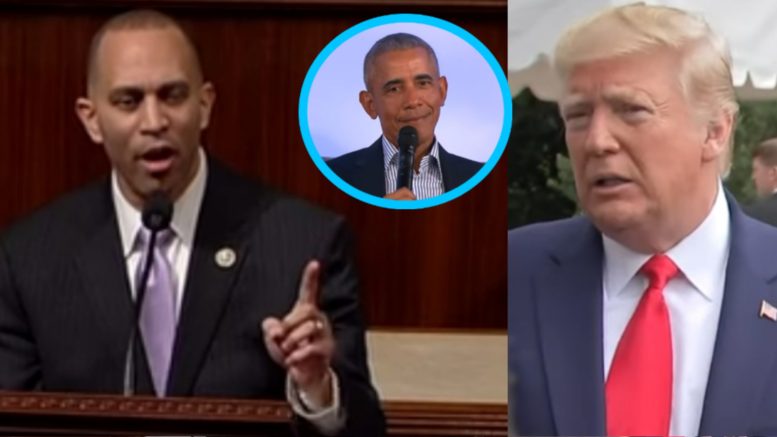 If there’s one thing that President Trump has turned around since taking over the reigns from Barack Obama, it’s the economy.

Since his inauguration in 2017, President Trump has created well over 6 million jobs and has brought the unemployment rate down to a 50-year low.

Employee compensation and savings have also been skyrocketing as a result of President Trump’s policies, including lower income taxes.

Democrats, however, are having a hard time accepting Trump’s economic success and have even gone as far as trying to pin it on former President Obama who got the ball rolling.

Instead of acknowledging that Trump could be making life better for Americans and working with Republicans to build to it, Democrats have chosen to focus all of their efforts trying to impeach the President since they took over the House in January.

And while President Trump has coined the nickname for them as “Do Nothing Democrats,” Congressman Hakeem Jeffries made an attempt to turn the tables. See Below

In a tweet directed at America’s economic success, Jeffries took aim at President Trump and suggested it was Obama who should be hailed for the strong economy.

“Trump inherited a strong economy from @BarackObama,” Jeffries said. “But now he is blowing it.”

“House Dems are working to lower drug prices and fix our crumbling infrastructure #ForThePeople,” Hakeem went on to claim. “#DoNothingDonald is too busy soliciting foreign interference in the 2020 election. SAD.” Video Below

But now he is blowing it.

House Dems are working to lower drug prices and fix our crumbling infrastructure #ForThePeople.#DoNothingDonald is too busy soliciting foreign interference in the 2020 election.

While everyone is entitled to their own opinion, it’s hard to imagine that decisions Obama made nearly three years ago have anything to do with the economic success that America enjoys today.

Afterall, President Obama focused much of his time trying to make Obamacare a success, rather than the economy. While on the other hand, President Trump has made the economy one of his top priorities, which has been so far, so good.

In ending, we leave you with video of Kayleigh McEnany pointing out President Trump’s economic accomplishments that Democrats ignore.